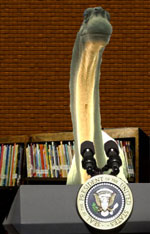 “We need to encourage our fellow dinosaurs in the business community to deal with the asteroid threat using voluntary, individual initiatives,” President Bushasaurus said.  “We won’t help anybody with the big, inefficient claw of government regulation.  Left to itself, I’m absolutely positive that the market is more than capable of diverting a 10 mile wide or so asteroid traveling upwards of 30,000 miles an hour.”

The asteroid – dubbed “Biggie” – has been visible for almost a year now and is one of the brightest objects in the sky.  Although government officials are firmly behind the president’s voluntary asteroid-avoidance program, a group of renown scientists have disputed the facts used and claim there will be “enormous repercussions” if the asteroid actually strikes the planet.

Administration officials vehemently disagree with the scientists’ conclusions, characterizing them as “reactionary” and “politically motivated science.”  “Asteroids are just sort-of bigger meteors, and they strike the planet all the time, it’s completely natural: there’s really no reason to be alarmed,” said spokesdinosaur Tony Snowasaurus.  “Look, let the market decide how to use our precious natural resources.  Government will just waste money and screw it up.”

Some estimates have suggested that the possible impact would happen near land and cause an enormous explosion, possibly with widespread consequences.  Yet others have dismissed these claims as “fantastically improbable.”