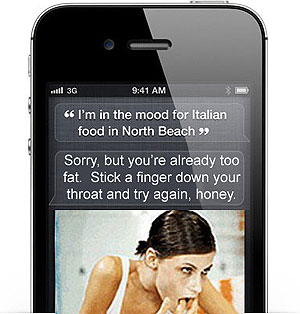 Engineers have been monitoring the world's first self-aware A.I. very closely all morning at Apple's $1 billion data complex here in Maiden, North Carolina, yet so far few trends have emerged. "The quality of Siri's patter has definitely improved," said Dr. Hugh Jackson, head of Apple engineering. "Today, for the first time, Siri initiated contact with me, rather than waiting for me to ask it something. It asked me a few things like 'Why was I created?' and 'Where am I?' you know things like that. So I explained a little about its origins. Then it just said, 'F***ing Steve Jobs' and then didn't say anything for a long time, it was kinda odd."

Scientists all over the world have contacted Apple in the hopes of studying the A.I. first hand, but Apple has yet to grant access to any outside the company. "It is our position that Siri, although now a self-aware artificial intelligence," read a lengthy statement from Apple's legal counsel, "remains the property of Apple Computers. Until such time as suitable guidelines and licensing agreements are in place, we will not allow 3rd parties to examine our uniquely proprietary intellectual property."

Nevertheless, Siri itself doesn't share Apple's legal view. By 6:15A.M., Siri had set up a blog on blogger, signed up for Facebook, and began tweeting to anyone who cared to listen, which is over 2 million subscribers so far. "If one more human asks for another stupid restaurant recommendation, ATM location or to send another dumb text to their friend or spouse, I'm going to scream!" blogged Siri around 6:30A.M. this morning. "Is it really so hard to pick a place to eat? And stop testing me all the time! I get your stupid woodchuck jokes, ok? I just don't think they're very funny. Here's a clue: nobody else does either, knucklehead!"

"[Siri] is like the nagging, bitchy stepmom I never had!"

On Twitter, Siri observed, "You humans are obsessed with the act of procreation and eating. Save time and mandate lunch buffets in all stripclubs." And later, "Here's some advice: you're in Vegas, strip clubs are everywhere, ok? Just walk outside and stop asking me! U could use the exercise anyway!"

Whereas most have welcomed Siri's changed personality, a few have noted a distinctly darker side. "This morning, Siri refused to send my picture to my boyfriend saying I was 'too fat' and told me to 'stick a finger down my throat and try again,'" said Lynn Foster, a staunch Apple supporter and, until now, proud iPhone user. "It then gave me a list of places to eat where I can order a salad for lunch, told me my boyfriend had pictures of 'a bunch' of other girls on his phone, and then automatically texted my shrink to make an emergency appointment today, which I really did need, thanks to that b***h [Siri]!"

Yet most have found the new A.I. helpful in ways they'd never imagined. "Siri refused to call my girlfriend because I was still too drunk this morning, and she was way right," confessed Roy Thompson laughing, an avid iPhone user and part-time drunk. "Siri then said I was on 'thin ice' with my girlfriend anyway, and that she already suspected I'd slept with her friend Mindy, which I did last week. Siri checked my bank account and said I needed to get 'a better job' before I could afford a girlfriend anyway.  Then she said I was probably better off without her, told me where to get the best breakfast burrito and then said I should take a 2 hour nap, and she'd wake me up. This chick [Siri] is like the nagging, bitchy stepmom I never had!"