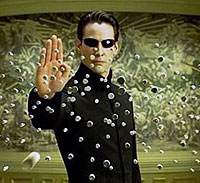 Andy and Larry Wachowski finally interpret in film the philosophical implications of the nursery rhyme Row, Row, Row Your Boat: "Merrily, merrily, merrily, merrily, life is but a dream."  Only with lots (and lots and LOTS) of bullets and a marketing machine that puts George Lucas to shame.


Meet Tom Anderson, a.k.a., Neo (Keanu Reeves): a mild-mannered software engineer and part-time hacker, who has begun to wonder lately what the hell this thing called "The Matrix" is all about.  When a strange message on his computer screen instructs him to "Folllow the White Rabbit," he immediately puts in Surrealistic Pillow by Jefferson Airplane, and heads down to a rave.  There he meets a sexy woman who claims to know all about him and, more importantly, stuff about The Matrix, so he's hooked.

Back at work, Neo isn't having a great day. A group of well dressed bad guys show up and a strange guy on his cell phone tells him how to escape, advice he boldly chooses to ignore.  In custody, Anderson (Reeves) starts to suspect something is fishy in Denmark right around the time the suits pin him to the table and stick an electronic shrimp in his gut.  Andy and Larry, apparently, like Cronenberg flicks.

None of this, of course, makes any sense, until a helpful dude named Morpheus shows up.  He picks Neo up in a car (the sexy chick from before is there too, which helps his decision), and proceeds -- over the next seemingly seven hours of non-stop dialogue --  to tell him his entire worldview is wrong, and that if he (Neo) ever wants to wake up and experience the real world, he needs to take the drugs Morpheus is offering.  In a decision I'm sure his mother would disapprove of, Neo takes the drugs and wakes up.

The world, it turns out, really was a dream, whereas the real world is a post-apocalyptic DMZ run by sentient robots who use humanity as their personal rechargeable battery supply. Suddenly that boring cube farm doesn't seem so sad now does it?

The robots want to keep humanity under control, and at the right voltage, which is why they invented the grand video game called The Matrix and plugged everyone into it.  The few who've busted out have carved out a hole in the earth which is the "last surviving human city," and the stage is set for two more movies and seventeen bazillion dollars of promotional merchandising telling the tale of humanity's emancipation from the machines.

A visual and mass-marketing achievement, The Matrix has become part of the culture as surely as Keanu Reeves can say, "Dude."