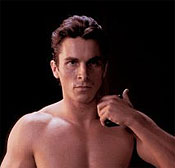 Christian Bale works on his blank emotionless stare in this odd sci-fi offering from Bob and Harvey Weinstein.

It's the post-apocalyptic future and everyone not vaporized in a nuclear blast live in a dystopia called "Libria," ruled by the totalitarian "Father." He's a kinder, gentler Big Brother who rules over the populace via his elite crime-fighting Clerics.

Why "Clerics," cousin? Your guess is as good as mine. See, in this world, they've decided that the best way to stop war was to eradicate all human emotion via self-administered injections of mood altering drugs. So naturally the cops would be called "clerics," right? Ahh yeah.

Since it's self-administered, you can see what's coming: some stop taking it, start "feeling" stuff and join the resistance movement to start collecting objects of art and hoarding dime store trinkets. Yep, that's the future of humanity, folks: art thieves and junk collectors. Sleep tight, chucko!

If you, like me, were ever curious what would happen if the Wachowski brothers gangbanged Aldous Huxley, here it is: a sentimental look at the power and costs of conformity, seen through the pitiless stare of one of its elite (Bale) as he slowly awakens into a feeling being. Oh yeah, and there's really cool firefights.

In fact, one of the most memorable features of this world is something called the "gun kata": an elaborate martial art based upon the most probable firing positions, movements and patterns of combatants in close quarters. They demo this frequently in the flick and it's pretty fucking cool.

All in all, it's worth your moola. It's not as "Zen" as The Matrix nor as insightful as Brave New World, but it's good entertainment and you don't have to sit through 2 minutes of Morpheus' pseudo-intellectual jabbering before seeing shit blow up.