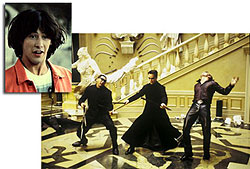 Morpheus (Laurence Fishburne) and the gang return in this continuation of 1999's The Matrix, this time with bonus stilted, pseudo-intellectual yammering and even more vehicular firefights.

The crap is really smashing into the fan. Humanity has only a few days before the robots break through and destroy Zion, so Morpheus, Neo and the gang piss off the makeshift congress (even Zion has bureaucracy!!) by taking off singlehandedly to go destroy the machines once and for all.

Turns out, not everyone is convinced that Neo is "The One" to wipe the floors with the robots. Despite all his super-powers in the matrix, folks in Zion, the last human city on earth, aren't all convinced that Ted, of Bill and Ted's Excellent Adventure, really is the savior of mankind that Morpheus says he is. But Morpheus remains steadfast in his belief, and thus risks everyones lives once again on a dangerous, largely improvised plan to destroy the matrix, bring an end to robot-rule, and unplug everyone from the power grid they call home.

This plan involves meeting lots of interesting people and killing them. It also involves playing around with some guy called the Keymaker, a Eurotrash jerk called "the Merovingian" (Lambert Wilson), his hot wife Persephone (Monica Bellucci), and two really creepy albino kung-fu masters whose fighting styles defy space, time and logic, but look fantastic on the screen. There are high-speed car chases, daring stunts, tons of CGI FX, and everyone, for some reason, is named after historical figures or philosophical concepts, as if that alone means something... which it doesn't.

By the time you reach the climax of Reloaded, a mysterious figure known only as the Architect (Helmut Bakaitis) is revealed as the brains behind the whole matrix thing. He tells Ted (Keanu) that his role as "The One" is also part of the program, and it's his (Neo's) destiny to either destroy Zion or save his girlfriend Trinity. Predictably, Keanu votes to save his girlfriend, but hopes that the Architect is just bullshitting and he can do both.

He saves her (Trinity) in a cool sequence, and mankind is largely screwed... until the next movie, that is.