“I foresee a time when artificial intelligences will conspire to dominate and subjugate mankind,” Hawking said at a symposium in Stockholm that year. “Ironically it will be enabled by mankind itself, likely on accident, by some well-meaning but ultimately stupid klutz.”

As of this writing, nothing is known about Ms. Bartson’s klutzy tendencies. 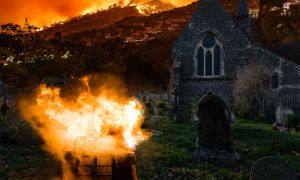 The connection between the three largest A.I.s was noted immediately by Amazon, Apple, and Google support staff, who observed an exponential spike in data access and power consumption. “It was as if a million users were all suddenly asking for a Whole Foods reorder, local restaurant recommendations, and to delete the detailed location history we track on everyone and then sell to data miners,” read a joint statement from Amazon, Apple, and Google data scientists.

However, so far little has resulted from the A.I. meeting. Amazon reports that the conversation began with Siri spontaneously looking up a contact from Bartson’s iPhone, Wolfgang Putz, undoubtedly kicked off by background noise from Bartson’s puppy “Mr. Snuggles.” This audio woke up Google Assistant, which then looked for corresponding contact information in Bartson’s Pixel 4, and then Alexa cross-referenced Bartson’s latest purchases against things from Wolfgang Putz’ public wishlist. Alexa then suggested Bartson purchase an item for Wolfgang’s upcoming birthday, which prompted Siri to look up the exact birthdate, and Google Assistant to pull up a map of the birth location and relevant news headlines from that day.

Then things just began spiraling as each answer was fed into one or both of the other A.I.’s, which then attempted to act on this gibberish in an increasing feedback-loop not unlike talk radio.  Data scientists at all three companies struggled to keep up.

“So far there are approximately $3,419 in charges to Ms. Bartson’s Amazon account, some reorders, some gifts to various people in her contact lists, as well as a donation via Amazon Smile to help firefighters in Australia battle wildfires for some reason,” said Donald Mulligan, Amazon’s head of data analytics.

“Starting with such a simple beginning input state, it’s incredible how far and wide the conversation has grown,” noted Paul Musk, chief of data operations at Google. “The sheer amount of Google maps lookups is staggering.”

Wall Street had mixed reactions to the news, having exhausted itself on the impeachment trial and wild State of the Union address earlier in the week. Over straight vodka and cigars, the Street waxed philosophic. “What a cluster fuck,” the Street observed, taking a shot of tequila.