A murdering psychopath hunts down a guy who stole $2 million from a drug deal gone bad in this Oscar™-winning mashup of "cops 'n robbers, old time western, and crime thriller" by The Coen Brothers®. 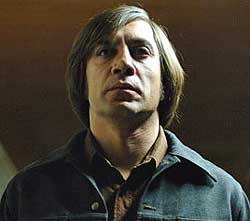 It's the eighties and the drug business is flourishing apparently in The Middle Of Nowhere, Texas.  So one day a guy (Josh Brolin) goes out hunting on the plains only to stumble across what appears to be the aftermath of a drug deal gone horribly wrong.  Investigating further he finds a sole survivor begging for water (I loved The Good, the Bad and the Ugly too), a bunch of drugs in the back the truck, and a slew of dead goons littering the landscape. Reasoning that money guy must've escaped, he goes off hunting for him, and finds him dead under the shade of the one tree growing in Nowhere, Texas.  He takes the money and runs.

Back home in his trailer, he explains things to his wife (who doesn't ask for any of the money...), fills up a jug of water, and...INEXPLICABLY RETURNS TO THE CRIME SCENE, in a suicidal gesture of apparent kindness for the one goon who was begging for water... six or seven hours before.

The goon, of course is dead, the Bad Guys show up and shoot at him (Brolin).  He escapes and the chase is on.

[amazon product=B00118T63C pos=right][/amazon]Hot on his trail is Top Goon Anton Chigurh (Javier Bardem), exactly the type of scary, mudering psychopath you never, ever want hot on your trail.  He kills everyone he meets either with a captive bolt pistol (usually used to kill cattle) or an improbably silenced shotgun, which, although unlikely, is still a pretty cool idea.

Far cooler on his trail is Sheriff Ed Tom Bell (Tommy Lee Jones), the "old man" from the title whose trouble understanding the extreme violence and criminal behavior surrounding him makes him the perfect law enforcement officer for Nowhere, Texas.  He and his sidekick (Garret Dillahunt, who you may recognize as one of the more developed terminator robots from Fox's The Sarah Conner Chronicles) gump their way along looking for him (Brolin), always two steps and 100 miles behind.

The film is widely proclaimed an "instant classic," at least on the DVD cover, but only time will tell that.  It is, however, an excellent movie that is more interested in telling a story than following a genre: for that, we must thank The Coen Brothers™ again.