If you're as fascinated as we were by the prospect of George Clooney, Brad Pitt, John Malkovich, Tilda Swinton, and J.K. Simmons acting in a Coen Brothers™ film, Burn After Reading is the answer you've been waiting for. 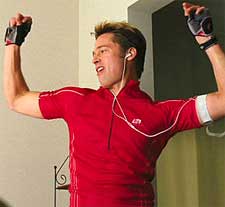 Disgruntled alcoholic Osbourne Cox (Malkovich) has decided to write his memoirs. Normally, this wouldn't present any complicating issues except that this particular disgruntled alcoholic was a CIA intelligence analyst, right up until he was fired, who has stolen a bunch of top secret documents prior to his departure. Thanks partly to his wife (Swinton), these documents are all helpfully stored on a single CD ROM, which is left at the gym one day. (Keen aficionados of plot construction note the MacGuffin now....)

[amazon product=B001JIE7JC pos=right][/amazon]The disc is discovered by normally oblivious fitness instructor Chad Feldheimer (Brad Pitt), who, after inspection, determines it to be full of spy stuff and thus sees an opportunity for cash, along with co-worker Linda Litzke (Frances McDormand), a woman obsessed with plastic surgery. The race is on.

I won't go through many of the details of what happens next because this is a Coen Brothers® film and you need to see it to believe it, and you should. Suffice to say the characters turn the plot into a ginormous cluster-**ck of epic proportions, involving at various points, the CIA, the KGB, and the State Department (Clooney) who murders someone in possibly the most comic way possible.

The payoff is, arguably, the final minutes of the movie where CIA officer David Rasche desperately attempts to explain the debacle to his boss J.K. Simmons in one of the funniest scenes in recent memory. Trying not to sound completely insane, he explains what happened and why, to the best of his ability, but the story sounds so ridiculous by the end that an exasperated Simmons (perfectly chosen for this part) would have agreed to almost anything to be quit of the entire affair.