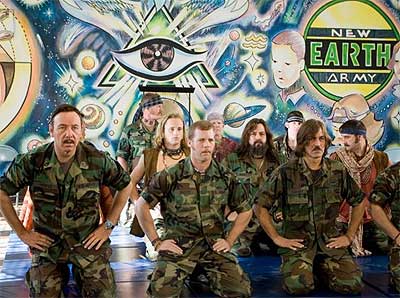 Ever wonder what would happen if the U.S. Government bankrolled a hippie to figure out how the Army could take advantage of psychics? Probably not, if you're like most Americans, but nevertheless someone went ahead and made a movie about it anyway.

Bob Wilton (Ewan McGregor) is your typical Ann Arbor newspaper reporter. His wife's just left him for a guy with one arm and he feels a burning need to do something important. So it's off to Iraq (this is 2004 or so) via Kuwait, where he meets a very strange guy named Lyn Cassady (George Clooney) at a bar. It turns out Bob (McGregor) has heard the name before. See before he trundled off to the war zone, he interviewed a local whack-job named Gus (Stephen Root) who told him all about Lyn, psychic stuff, and how he learned to kill a hamster "with his mind."

When it comes to paranoid ravings, it doesn't get much better than Stephen Root.

Bob asks Lyn about Gus (Root), and the race is on. Turns out, Lyn is "on a mission" in the warzone, so Bob eagerly hops aboard the U.S.S. Crazytown and immediately gets lost in the Iraqi desert and kidnapped by anti-American insurgents. Along the way Lyn (Clooney) fills in his new protegé on all the crazy-ass stuff from his past, especially Bill Django's (Jeff Bridges) story, the hippie-leader and founder of the "New Earth Army" (Act 2 is pretty much background to the flashbacks), and gets Bob convinced he's special too.

Before long, the bad guy shows up in the form of Larry Hooper (Kevin Spacey). Hooper, a savvy self-promoter short on psychic skills, soon gets Django (Bridges) fired, and other stuff happens. Before long, Django, Bob and Lyn spike an entire army base's food with LSD, Django and Lyn disappear in a chopper, and Bob writes the whole, wacky story down for the world to read, forcing everyone to promptly ignore it.

Weird and hippie-tastic, TMWSAG is an interesting diversion, and pretty fun at moments, worth a view on Netflix (it's streaming as of this writing) but probably not a purchase..