(Sung like a child's taunt) They're having a secret meeting!

They're having a secret meeting!

The big shots are in Pebble Beach Resort.

Bill Clinton and Hillary, Tony Blair, Arnold, Bono and Al Gore are at Pebble Beach Resort to pool their talents, pick their brains, compare notes and thoughts or what have you...all on the theme...ready for this? "Imagining the Future."

Doesn't it give you hope? Doesn't it inspire you? Doesn't it make you sleep better at night, knowing that these paragons are planning all our futures? Tucked away as they are in a setting of supreme beauty and opulence? Pebble Beach. 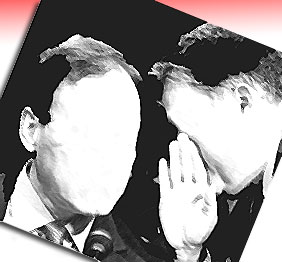 Doesn't it give you cause for joy that these people are planning a better world for you, in your name and without your knowledge or participation?

I know it makes me, whom these elitists, if they ever had an inkling who I was (maybe they'll see this column), would consider me, unlike them, just a painfully average guy.

I want to tell ya,' it makes me warm and fuzzy all over.

They play a round of tennis and golf amid the grandeur of the Central California Coast, attend a party where they joke and admire each other's fame. Then it's time for a massage, and the kind of smug looks that come from unbridled riches and, for example, not being a single mom in a smog-filled crime-ridden neighborhood who is three hours ahead of her bills.

Oh wait a minute! They're going to solve all that.

Then it's time for a cocktail reception (the healthier ones drink Perrier water). And then. And then. We sit down and talk about the future...everybody's.

They're going to change humanity for the better. We won't need toilet paper in the future.

Bill and Hillary. What can you say? They can still stand the sight of each other? Talk about cold-blooded lizards. I despise Bill for his slick cleverness and total lack of idealism.

The only thing I can say about him is he's so much less offensive than the current president. Hillary! Hey!

She thinks she can become president of the world, but she can't even manage her own husband. You have to wonder about somebody who would pick him.

At a recent world summit, Blair on his feet, hovered around the seated Bush so much I thought he was going to ask for an autograph, or lick his shoes. I think Blair is in love with Bush, the man of action, and wants to propose a homosexual affair. He might as well just work his nerve up, come out and ask. His failed policies aping everything Bush does might at the very least get him a date at Starbucks Pebble Beach.

Bono? Bono? Are they talking about Sonny Bono? He's dead from a skiing accident, isn't he?

Arnold. "Ve are going to all lift ze veights in the future. Ya-voll! Ve will all take de steroids!"

I've got to give Arnold credit. He listened to somebody who told him to tone down his verbal insults against women and gays. In other words, stop acting like an arrogant Kraut. He's regained some of his popularity against hapless and largely unknown Democrat challengers. He can contribute his three thoughts to the conference, how to illegally manipulate a green card to work in a new host country, how to start a mail order barbell business, and how to act in movies with no talent.

Al has the most clout because he's coming off a hit movie himself, one he directed. He can shame the others with tales of his military service in Vietnam, how he invented the Internet that makes this column possible, and he can also adopt an "I told you so" attitude about global warming. He should be the most at home in the meeting because he takes such an interest in hot air.

Where's Clint Eastwood? I want him to tell them all..."make my day...punks!"

Also attending are John McCain, Newt Gingrich, Athletics Manager Bill Bean and Israeli Vice Premier Peres, but they're not worthy of further mention, cause they're not singers or movie stars.

In the end, they will all get in their limousines (contributing more to greenhouse emissions) and head back to their luxury penthouses in New York, pleased with themselves and an honest day's work.