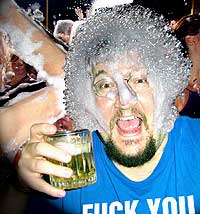 According to Alexa, a fine company among the Amazon constellation of companies, IRREVERENT is ranked 4,150,370th in the WORLD for web traffic.  This impressive showing compares to a ranking of 2,052nd for The ONION, a mere 202,259.7% better ranking.  So for all you naysayers and choose-up-siders I say, HA!  And HA HA HA!!  We're on our way!

Lest ye think this is a undeservedly upbeat message for a drunk guy with a fuck you shirt and foam on his head, you clearly don't know us here at the zine.  We've been doing this for a long long time, making you laugh, we have.  Oh yes.  Ever since we were ranked 5,711,421st in fact.  Baby, we've come a long, long way!

Okay I made that last number up, but the point is that we must've been ranked worse before.  And just think about how many web sites there are in the world, hmm?  According to Netcraft -- a bunch of really smart guys who count things -- there are 74,409,971 of 'em (Oct. 2005), which puts us in the top 5.6% of all sites on the earth.  Frankly, I'm understanding now why men have nipples too.

Yes it's true: as far as you figure, we're statistically better than 94.4% of the websites you'll ever visit, which is as fine an argument as I've ever heard in support of massively repressive net taxation.  And you can trust me too, because I'm a guy in a fuck you shirt at an Alexa rankings foam party, and you're not.  So there.

If this happens to intimidate other strange ezines or guys in fuck you shirts from starting up their own little web thingies, well that's show biz.  Nobody promised you a rose garden, slappy, or certainly a world free from the behemoth of satirical competition that is the IRREVERENT juggernaut of whimsey.

So enter if you dare.  But if you try to knock us to 4,150,371st, I'd watch my back if I were you.  Certainly I'd watch my sanity too, if I were you, for wanting to spend years of your life on something like this and get stuck 4 million steps behind the fucking ONION.  Talk about a kick in the crotch, why doesn't Alexa just come out and dump sugar in my gas tank while they're at it?  Probably have to PAY for that.

What kind of a stupid service would go out there and rank sites anyway?  Okay, yes, sure, another fantastic web business model from Jeff goddamn Bezos for standardizing and promoting web advertising, goddamnit, but totally depressing for millions of jerks like me, you know, just trying to eek out a mild subsistence off the ONION's droppings.

HEY!  While yer at it, why not rank EVERY humor site against NATIONAL LAMPOON for christssake..ahh shit, according to Alexa even they're 27,065th!  The ONION beats NATIONAL LAMPOON??!!!  Well, okay I guess I don't feel so bad.

So in conclusion, well that's it.  I've got foam to get back to and you've got a significant buzz to read off, so enjoy.  Oh and if any of you out there reading this work for The Onion, a fine Madison/Milwaukee area 1990s startup, it's all in good fun.  Although I resent and respect your achievement, I certainly didn't mean to demean your product or say anything else that's actionable by your fine legal staff.  Although you're... over 4 million domains ahead of us, we shall not be deterred.  We will be depressed, hostile, bitter, angry, vengeful, and envious, but not deterred.  We'll see ya on the other side.