A Phone With a View

So I was thumbing through The Necronomicon the other day when I realized that there was no putting it off any longer: I had to get a new cell phone.  The one I’d bought in 1999 was just getting too old.  The battery would only last 7-10 minutes whenever I used it, and clerks would only laugh and point fingers at my nose as I searched for a replacement battery.  Anyway, let’s face it: the quality of cell phone service offerings in 1999 hardly compares to today’s.  So I decided then and there to get a new phone.

For some people, this automatically requires several weeks of research into possible new carriers, phone models, desired services, and cost comparisons, while carefully reading the latest Consumer Reports.  In difference, I walked into the nearest mall some days later, a few shots under my belt, found the Sprint kiosk and announced that I was a Sprint customer and wanted to upgrade my phone.  And no, I didn’t bring my old phone with me or anything else besides my wallet and a Frappuccino from the nearby Starbucks.  Spontaneity is key. 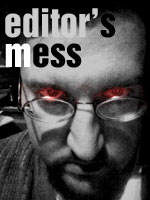 The kiosk woman asked me some preliminary questions.  I was thankful that she did, in fact, bother to ask me things that only a genuine me was likely to know off the top of his head, like my existing phone number, last four digits of my social security number, and some other stuff that I wasn’t paying attention to.  Then she called the main Sprint phone tree from hell, and determined that I qualified for a “$150 phone credit” for upgrading, which means that I didn’t have to pay full price.  Then it came down to selecting an actual phone.

The phones, frankly, all look alike.  Of course, to Sprint Kiosk WomenTM they are all wildly different.  “For example, this one,” she tells me, pointing to a phone at random, “has an interchangeable face plate, whereas this one here,” she says, indicating a seemingly identical phone, “is fine for your basic phone model.”  I – apparently she can tell this from the Sprint phone tree from hell – have dealt with a “basic phone model” since 1999, and so she wants to show me something comparable in this century.  She’s appropriately condescending and cheerful as she points out the quasi-godlike features of the far more expensive model, picking it up lovingly, and handing it to me.

This thing has everything you’d want in a modern 21st Century Cell Phone. For instance, it has a camera, camcorder, web browser, email and instant message ability, games, video, music downloads, and has a speaker-phone mode for when you truly want to disturb nearby people with idiotic conversations with your spouse.  “Yes, milk and chocolate milk, I got it.”  “Are you writing this down?”  “Yes, baby, I’ve got it.”  “And pick up some girly things too, and some more Crystal Lite.  And Fat-Free Half and Half.”  “Okay, got it.”  Now everyone knows her menstruation cycle.  “And pick me up some smokes.”  “Okay.  Anything else.”  “Some wine.  Got that?”  What ever did we do without cell speaker phones?

The best thing, the kiosk woman tells me, is that I can try out all these new services for free for 30 days.  Just cancel if I don’t like it.  Well, okay, how I can argue with the Aristotelian logic of Sprint Kiosk Saleswomen?  It seems easy enough, so why not?

So I take one with everything: I get the camera, camcorder, email, instant messaging (with Yahoo, AOL, or something else), voice memo recorder, voice dialing, web surfing, email, along with their picture emailing service, where you can email anyone the pictures you’ve taken with your cell phone.

Okay, well I’m a kid in a candy store now.   I’m surfing the web in the restroom and taking pictures of all sorts of irrelevant crap, but nothing in restrooms.  I’m becoming a bit of a low-res cell phone picture snob too.

Cell phone photography, it turns out, is all the rage, lowering the quality of digital photography worldwide one simulated shutter click at a time.  Entire websites are dedicated to this questionable art form, along with legislation to tame the perverts (“upskirt.com,” “downblouse.org,” etc.).  Blogs upon blogs have stumbled all over themselves to capitalize on the combination of high-speed transmission and low-resolution pictures, making it easy for people to share their meaningless moments with millions of others who couldn’t care less.

As a result, we’re now able to document, in explicit detail, much more human nature than was possible before in recorded history: all the silly, pointless moments that make up day to day living are suddenly showing up on the web with the artistic panache of a Goya original.  Each fifteen year old is her very own goofy Heidi Klum and guys looking to score – always early adopters of high tech – frequent online dating services that combine their cell’s GPS locator and pictures with their bio, making them easy to find, but probably no more interesting in person.

You can really appreciate this technological advance if you consider all the historical wisdom that could be known today if only this stuff had been around hundreds of years ago.  Consider, for instance, Bill Shakespeare.  For decades scholars have debated key elements of the Bard’s life, even his very identity.  If cell cameras had been around, not only would these questions be unquestionably resolved, we’d have detailed intelligence of his daily acquaintances, drinking habits, clothing choices, shopping experiences, educational opportunities, travel patterns, daily neurotic tendencies, boyfriends (or girlfriends, if the Oscar winning film is credible): in short, everything you didn’t need to know and much, much more, until his actual writings would become that “thing he did between drinking binges and shopping at Spenser’s.”   I’ll bet “wspeare.net” would hit Alexa’s top 500, all without the NSA having to tap anything.

And no longer would have tedious debates about “what the Founding FathersTM intended” when they wrote the American Constitution.  We’d know, all right.  We’d know what Thomas Jefferson really did with his female slaves, up to and including some very naughty 3x5 glossys, I’d imagine, and who, among the FF’s really got into dusting their wigs and who sort-of faked it.  We’d have pictures of Thomas Paine photographing his own feces and showing it to his frat brothers at college keggers for years to come, and James Madison thumbing through 17th century girlie pictures cleverly masked by dusty English lawyerly tomes.    And I’m quite sure, given enough cell battery life, that George Washington himself would be caught on a Quicktime camcorder bitterly complaining about how cold it was at Valley Forge and loudly pondering why, in God’s name, anyone would ever want to live there.

Yep, it’s fun to imagine the possibilities.  But it’s even more fun to snap pictures and show them to your drinking buddies, who are largely too screwed up to do much more than laugh and say, “Dude, take another one!” while striking a clearly silly pose.

Maybe Douglas Adams was right after all, and coming down from the trees was a big mistake.  Maybe, but not nearly as fun.  Here, hang on: CLICK.