Flying is a wholly unnatural act for an ape descendent species.  We were not meant to fly.  Birds - a dinosaur remnant, if "scientists" can still be trusted - they have an excuse for flying; for them, it's a natural act.  For us it requires hours of preparation, including squeezing our liquids into clear plastic bags, before we are allowed the privilege of putting our lives into the hands of potentially quite drunken pilots who have a beef with their local union representation.  Yes, drunk and disgruntled.

So say, for the sake of argument, the plane crashes and everyone's killed.  For anyone to even notice in these post-9/11 days, it had better be the direct result of a dastardly plan from a megalomaniacal Islamo-fascist terrorist mastermind.  Joe Mechanic forgetting to fasten a wingnut (no, the other kind of wingnut) just won't cut it anymore.  The newscycle hardly even burps at hundreds of ordinary slobs losing their lives to incompetence.  Am I mourning alone?  I think we need to raise good old-fashioned American incompetence to its former glory.  Not everyone is lucky enough to be murdered by terrorism.

I mean what's the more likely cause of death for a typical American blockhead like me?  Is it: a) a far-flung conspiracy reaching into the depths of a thousand-year old religious conflict because the omniscient creator of the universe wrote three internally inconsistent books, or b) a far-flung bottle of axle-grease and a few loose bolts on an under-serviced, over-booked commercial airliner?  Of course the answer's (B), but thanks to a $300 billion advertising industry competing with a $45 billion American education budget, we have produced more egomaniacs with a sense of individual entitlement per capita than any other screwed up civilization in history, and they all want to believe it's (A).  On the bright side, at least we're still Number One in something besides wasting energy and bombing stuff.  (Incidentially, this is the same spending discrepancy that helped Gingrich write his famous contract with America, you know, before Abramoff used it to light his Cuban.  When you got a funny image, use it.)

But self-serving ego-inflation by corporate clods isn't the only reason we've lost respect for incompetence: it's boring.  So boring, in fact, that we'll believe virtually anything else to make reality seem more exciting.  We need to be stimulated and excited.  Look at any given Britney Spears song if you don't believe me: go ahead and try to remember the lyrics.  I double-dog dare you. 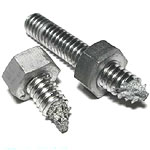 Incompetence is boring, but thanks to conspiracy nuts we don't have to deal with it very long.  Take, for instance, those dedicated group of whack-a-doos who deny that anyone at all was on the planes that struck the World Trade Center and Pentagon on 9/11: the planes, in "fact" were radio-controlled by the Pentagon or some shadowy group of baddies within it, goes their yarn.  In this case, even the "1,000 year old religious conflict" motive was too boring for them, and apparently they felt that the actual conspiracy by Osama bin Laden was too prosaic.  Wow, how jaded is that?  To take everyone off the planes entirely and lock them up on a secret airbase or something, and then convince everyone that they were dead... that's a long way to go relieve boredom.  Surely these guys must be accountants.  We're to believe this from the government that can't order enough Kevlar vests for the troops or bury a few sweet-heart reconstruction contracts tied to the Vice-President?  Actually, if Bush had that much intelligence and imagination, I'd have voted for the dummy.

We also deny incompetence because we Americans spend most of our lives scared crapless about everything from fatty oils to suitcase nukes, and, on the whole, we wouldn't trust Walter Cronkite to verify the sky is smoggy-gray.  Thanks to the power of advertising, we've grown to think just about every public message is bullshit, even if it's provably true.  And as every carny knows, being scared doesn't make you less gullible.

We're so scared we'll believe anything that makes the world appear less random and scary and more understandable and controlled.  If you think about it, it is a pretty scary realization that some slob who had a fight with his old lady that morning and was distracted from putting on the airplane landing wheels correctly, is responsible for turning you and 200 other poor bastards into human rotisserie.  Bizarrely, it's more comforting to blame Osama or some similar jerkwad because at least that seems like something we could do something about, or at least stick a bullet into, provided we could ever find the guy.  Accidents don't hide out in caves waiting to be sniped by an Army Ranger: like feces, accidents just happen.

Accidents and old fashioned incompetence are responsible for a lot more than we ever credit them.  Personally I look forward to the day when the social balance is restored and once again people stop looking for terror-filled bogeymen and contorted conspiracies and once again accept chaos as the only real natural order.

Meanwhile, plan to get to the airport at least 3 hours before your actual flight.  You can bring two lighters, two screwdrivers, and an acetylene torch on board, but leave that nail clippers home.