It’s All Your Fault

I’ll bet you never realized it, but pretty much everything that’s wrong with America’s society, culture and economic system is all your fault.  It’s true.  Wars, famine, blight, obesity, poverty, greed, crime, failing schools, infotainment, cable news shows, and the failure of the mainstream media (just to name a few); these are all your fault.  The reason it’s your fault is because of personal responsibility; we’re all responsible for our actions, so the blame ultimately boils down to We The People and our terrible choices.  Yup. 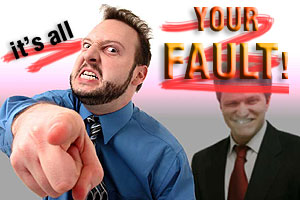 Take, for instance, the Global War On Terror ™.  That’s your fault too.  Now, you may not believe this because, chances are, you didn’t order the military occupation of Iraq or carpet-bomb anyone.  So you may think that means it’s not really your fault, but it is.  See, you didn’t rise up and yell loudly enough in protest.  You didn’t peacefully assemble, enough anyway, and demand political change.  Therefore, the argument goes, that’s your bad.  If I were you, I’d start writing a mess of “Sorry, I screwed up” cards for the tens of thousands of dead and wounded.  You have to admit, you did kinda blow it.

You also biffed it on obesity in America.  Here you may be reluctant to step up, pointing to a self-regulating food industry that injects more high-fructose corn syrup into your average waffle than the average weight of most (non-American) human beings.  Or, looking at a typical American school cafeteria menu, you may be inclined to think that since the nutritional content of the actual paper it’s printed on rivals the food itself, this allows you to abdicate your responsibility, but think again, chucko.  Nobody forces you to eat that stuff, or make your kids eat it either.  You’ve got a choice, so it’s your fault.  The school administrators, staff, and school board, well they’re just providing an option in the lunch menus and all those vending machines.  You can brown-bag it, it’s up to you, as soon as you get home from working your four jobs.  The stuff in the vending machines are just options; nobody’s making anyone buy it, especially since school age kids are renowned for their self-discipline in the  face of Cheetos and root beer.  Don’t blame Pepsico or Coke or any of their zillion subsidiaries like Kraft or Frito-Lay just because they’re lobbying the schools and providing huge cash incentives in the face of massive budget-cuts, physically stocking the machines and then spending millions in advertising dollars to make their particular high-fructose foods look way cooler than broccoli.  Nobody says you have to eat it just because they’re surrounding you with stuff engineered by corporate-parks full of food scientists to make it taste really yummy.  It’s your fault.  Where were you at the school board meetings, you know, on the two days a month you’re not working?  Slackers.

And while we’re sort-of on the topic, it’s also your fault that there’s poverty in the country.  You may want to blame some nebulous idea like “the economic system” for incentivizing greed and the culture for glorifying the accumulation of scarce resources just because you can, but come on!  Nobody forces you to go to work for someone else and become a cog in a mammoth industrial machine to make ends meet, pay the rent/mortgage, and put food on the table.  Wealth and all natural resources are unlimited, therefore there’s always enough to go around, so it’s your fault if you’re poor and struggling.  Don’t blame the guys with more personal wealth than a dozen countries who choose to spend it on a constellation of Rolls-Royces: they’re just better at it than you are.  They want it more.  You blew it and chose to be poor.  Why don’t you take responsibility for once!

Also stop whining about your guaranteed pension being replaced with a 401K heavy with your own company’s stock: becoming a financial expert isn’t so difficult, anyone can become a whiz in the stock market and trading, look at Warren Buffet.  Just read the prospectuses, they’re practically written for children!  If you’re eating Friskies at retirement, look in the mirror for whose fault that is.  Ask any of the Enron employees, they’ll tell you.

Right about now, you may be wondering where the “division of labor” fits into this argument; the concept that we designate certain people to specialize in taking care of stuff and become experts so that we can show up for work and take care of our families without needing to become experts in everything, which is impossible.  Well, I guess you have a point, come to think of it.  If we’re all responsible for this stuff, then, well, I say let the firings begin.  I’m no Milton Friedman, but I’m guessing that this is gonna save a couple bucks and therefore must be A Good Thing ™.  Let’s play Donald Trump.

I say we start with the F.D.A., school boards, and all the school administrators:  You’re all fired.  Pack up your stuff and clear out; you can keep all the porn on your laptops too, just use personal jump drives.  You’re right, junk science and poor food choices are all my fault, so why keep paying you guys to review science, regulate preservatives and write school menus?  I’ll take responsibility and decide for myself and my family, thank you very much.  I really don’t see the need for you guys to dress up in uncomfortable clothing and meet once in a while on public access or C-Span “to give me” options that I already have.  That’s just silly.  Buh-bye.  And take the teachers with you, because education is also my responsibility as a parent.  I can make flash-cards too.

On the crime-front, I agree with state militia organizations, second amendment advocates and the N.R.A. that it’s the duty of every American to take care of his or her own family and not rely on the forces of law enforcement.  Therefore, policemen and F.B.I.: You’re fired.  Pass a much more liberal “concealed-carry” law and loosen those background checks, and I’ll take care of law enforcement myself.  True, I have no training and am just as likely to kill an innocent person as a bad guy, but you can't make am omelette, etc.  You guys can go home and take care of your own families just like I will.  See ya at the bowling alley.  Well, before dark.

While we’re at it, let’s dismantle N.A.S.A. along with all the other bureaucratic science apparatuses, like the C.D.C. and National Weather Service.  That’s stuff nobody can really do by themselves, so it’s purely a waste of money.  If people want to take up voluntary collections to pay some geeks to stare out a telescope for some stupid reason, so be it, that’s what happens when fools get money.  (Morons.)

Also on the science-front, nobody made you cause global warming either by doing stuff you didn’t know would cause it.  Stop blaming the automobile manufacturers and oil companies!  It’s your fault, not theirs: they just gave you some options, like cars and fossil fuels, nobody said you had to use them or any of their derivatives like plastic or rubber.  Ever hear of a bike?  You’d know that too if you were an expert in global climate change, geology, and meteorology like you should be, so quit griping.  Fearful about global destruction?  Hey, you’re just getting what you deserve for not doing your homework.  Turn off the Seinfeld reruns already.

Let’s also open up road construction and other types of infrastructure building and let everyone who wants to (and has a few million dollars of specialized equipment) go door-to-door and take up a voluntary collection to buy the raw materials and pay the workers.  Departments of Transportation, welcome to Firedville, population YOU.

Say, that’s a lot of firings.  But by my reckoning, it also just saved everyone a whole lot of green that we’ve been stupidly allowing the government to steal from us in the form of taxation to pay for things that are our responsibility anyway.  What a gyp!

Wait a second, this sounds familiar…?