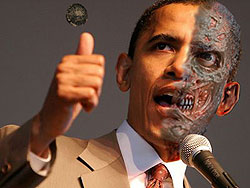 So much has happened in America since the last time anyone around here could be bothered to update IRREVERENT.  America had a series of rancorous political debates, starring John McCain -- in effect, the absolutely whitest white man ever to showcase the color -- and Barack Obama, who in comparison was considerably less white but far more articulate.  A nation continued to be divided over a crippling foreign war.  Then, for the first time in history, a non-white-white-white guy was elected to the highest office ever in a major Western democracy.  Michael Moore, I'm sure, made a movie about it within minutes.  Then the entire economy collapsed like Hulu-ized cranium.  Mushy, mush.

We were shocked, shocked I say to realize that all those nifty, highly profitable mortgages banks had been passing out like car-wash fliers weren't worth a car wash. But nevermind, because out of the darkness came a white knight, President Obama, and just like his comic counterpart, America hung all her hopes squarely on his cranium. Whatever you do, Secret Service, keep your guy away from exploding gasoline barrels.

Whew, that's a tall order.  In the spirit of full-disclosure, I am/was/and continue to be an Obama Man.  No, I didn't make a salacious YouTube video that would, as I think about it, have to contain a boat load of sexually confused overtones.  But I did support his candidacy and he did earn my vote, so in many ways, he's my Harvey Dent too. And, like everyone else, I've got some pretty high expectations of this guy, who, lest we forget, is still a politician.

To be fair to his predecessor, the bar has been set pretty low.  In fact, I'm quite sure we'd be singing savior praise to Homer Simpson at this point following eight years of George W. Bush.  But, despite exceedingly low expectations, President Obama has proven to be a figure of some J.F.K.-like inspiration, hopefully up to the tasks at hand.

One must admire the fact that he immediately began work.  Unlike The Big W, Obama started his job before he actually had it, which was a welcome change.  I'm pretty sure everyone by now had been conditioned to a few weeks off at a ranch somewhere, and nobody would've said anything if that's how Obama rolled.  After all, he just scored the presidency: give the man a break.  But he didn't.  He started working immediately on something called "The Economic Stimulus Package."

For the benefit of non-Americans reading this, non-Americans who never, ever watch international news, I'll explain it like this: The Economic Stimulus Package is the term given to something like $1 trillion dollars being pumped largely into Corporate America by our Federal Government.  It is also a vaguely sexual sounding term that sounds like it might be something pretty fun to do at parties.

"Hey guys, after strip poker, I'm pulling out The Economic Stimulus Package!"  you might say for instance.

"Whoa," would say someone named Becky.  "You got one of those?"

"Hell yah," you'd say, smiling.  "Got it off the internet.  Paid almost a trillion dollars for it too," you'd explain proudly.

"Dude, get it out now, I totally want to play," someone named Christi would say, who would be half-naked, and over-emphasizing the word "play."

But maybe that's just my imagination.  Idle sexual fantasy aside, The Stimulus Package (as it's called) is on it's way through Congress like a drunken prom date, everyone taking a piece as it gets passed by.