5 Surefire Ways to Move Ahead at Work

The internet is littered with successful corporate psychopaths with great teeth and substantial jawlines oozing to tell you how to succeed in business for only a modest non-refundable fee.  You've seen their infomercials, you've probably bought their books, CDs and DVDs, and, if you're like me, you've got a neat stack of all this crap up in the attic someplace creating great nesting for various mice.  Needless to say, it's mostly worthless garbage.

But wait, there's more!  Keep reading and we shall reveal to you (without the nonrefundable fee) the TOP 5 SUREFIRE WAYS TO MOVE AHEAD AT WORK, guaranteed!1

5. Decorate your cube for every possible holiday.
Nobody likes a grinch, and the guy with the bonsai tree in his cube is just looking for a place to hang his spirit beads while he adjusts his pony tail. He doesn't give a twig about you.

However, watch out for Guy Fawkes Night if you work in information security.

Passersby will love your attention to detail, including the boss. Remember though to err on the side of caution and give Kwanzaa, Hanukkah and Ramadan a respectful nod without being a jerk about it.

4. Be the breakfast bagel guy.
Everyone loves bagels. Your coworkers (and boss) love bagels too. They particularly love free bagels. Well free for them.

Be sure to get a good selection of cream cheeses: nobody wants to pick between Hazelnut-Squash and Blueberry-Fennel, but get at least one of them for pony tail guy. He'll choke it down purely out of spite while he tells everyone in general about his latest trip to Portland.  I really hate that guy.

3. Volunteer for all the tedious tasks and unwanted duties that come up.
In the office there are always plenty of tasks nobody wants to do. Copy paper fetching, office supply ordering, time-sheet checking, Workplace Violence Awareness Guy (whose job it is to keep a close eye on Bill in shipping/receiving who talks to everyone about how tough it was to get his concealed carry permit), and the person who hits up everyone for charity donations by showing them increasingly pathetic photos of needy children and puppies.

Nobody wants to do this stuff but it needs to get done. Especially because since the ink on his divorce dried, Bill has become the least gruntled person in the greater metropolitan area.

2. Make the coffee.
This could be up in the stuff nobody wants to do item, but coffee making guy is a much more important role. True nobody wants to do it, but without coffee the office would be leaning heavily on Workplace Violence Awareness Guy for day-to-day security. Nobody can take the boring company re-branding meeting without a generous triple shot of whatever sludge they're buying these days. At least it's strong.

Besides making the coffee makes you look like a team player. People will wander in and out, looking pensively at you as you open the coffee packages and pour them into the filter, and they will remember your face, particularly if you accidentally dump in some decaf. They will hunt you down, cube by cube in a hard-target search until they find you and explain your mistake at length.

If this happens to be Bill from shipping/receiving, duck. 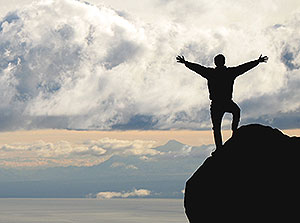 1. Find your bosses' name in the Ashley Madison dump.
Frankly, the 11 million user Ashley Madison hack on July 20th was a golden opportunity with a bow on it for ambitious, career-minded office workers around the globe. Even the threat of bogus exposure would cow all but the most hardcore hound dog or cougar boss in Corporate America.

Now we're not suggesting you actually blackmail anybody, which we're pretty sure is illegal under most legal systems, just that you hint at your advanced knowledge of the boss's extramarital proclivities until that promotion you've been eyeing for the past three years suddenly becomes available. That's all.