How to Spot a Transvestite Cougar 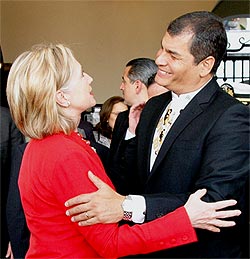 A cougar used to mean a wild, big blondish cat that lurked in remote parts of the United States, but also occasionally showed up in urban areas, for example late at night on a golf course near your house.

Today, the word had taken on a completely different meaning, and has gone to a sexual meaning. Every time a word in the English language changes meaning, it goes from an innocent to a sexual one. English speaking people must have sex on the brain. Maybe that’s why there are 375 million of us.

A cougar, sometimes called a mountain lion or a “puma,” has so many titles, it’s obvious that in the old days the animal used to scare the shit out of people. As they were running away from it, they screamed, “it’s a cougar, it’s a puma, it’s a mountain lion.”

A noble Frenchman naturalist of the late 1700s with the sissy-sounding name Count Georges Buffon coined the word calling the puma a “cou--gaar” (spoken in a French accent). This word evolved from an earlier Brazilian-Portuguese word that was in turn derived from an ancient Tupi Indian word in Brazil that meant “false deer.”

In other words, by the time you got close enough to figure out it wasn’t a deer, it was tearing the shit out of you with its claws. You screamed, “it’s a puma, it’s a mountain lion, it’s a cou--gaar!”

Other names for the cougar are painter, panther and mountain screamer. If this cat got its claws on you, you were the screamer in the mountains. A stalk-and-ambush-style predator, you would try to run away from it, probably the reason a brand of track shoes are today labeled “Puma.”

If you see a cougar you’re not supposed to run, you’re supposed to stand still and not look scared and act tall. Good luck!

It’s fitting therefore that today a cougar means a 40-year-old woman who stalks younger men for sexual purposes at a bar. Some of these women are no doubt blonde like the big cat from using hair dye.

How did this word change? Some credit Valerie Gibson, a romance columnist for the Toronto Sun Times. Others say the word changed in the 1980s when Hockey players nicknamed older women who wanted to sleep with them “cougars.”

See the link. Hockey is very popular in Toronto. It’s clear. Valerie Gibson went to a hockey game and tried to flirt with a hockey player. Sex on ice with a hockey puck. Thrilling!

There are many similarities between the cougar, the cat, and the cougar, the older woman at a bar in search of young men. They both look hungry and stalk helpless prey under 25-years-old, the young, juicy ones. They both come out mainly at night and sleep in the day like Dracula. They both have lethal fangs and nails. They both lock their arms around their prey in a vicious hug while chewing at the victim’s neck.

But what if you’re a transvestite cougar? This is a unisex world with women now serving on combat submarines. Don’t expect only women to be cougars. Guys can be too. Guys in drag. You can probably tell if it’s a male cougar. They are often taller, and hairier, standing at the bar. They often have cat-looking heavy mascara around the eyes, thick lipstick and long tongues hanging out. If you see a tattoo on a muscular arm with a US Navy anchor and the word “Mother,” it’s probably a transvestite cougar.

Transvestite cougars often use the line, “you just don’t understand my kind of love.”

As you can see, it’s a wild world and word out there.