Vote With Your Visa

It was no surprise to me that high school students recently questioned about the first amendment failed worse than a Halliburton sewer system. Not only did they not understand the protection it offers them as Americans nor appreciate the sacrifices that were made to gather it, they also didn't mind losing it. This came as a shock to many in the media, but not to me. Why? Well, who cares about losing something you have no use for in the first place? Who'd even miss it? 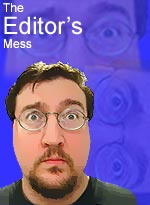 Trust me, whatever freedoms get clipped by the Patriot Act, or Patriot 2, or Patriot 19.7.3, they won't touch the freedom to hang out at the mall, the freedom to buy a new cell phone or video game or DVD, or the freedom to work a job to pay rent, buy some beer and get a girlfriend. Those freedoms, amigo, those tangible freedoms are guaranteed, but not by any puny piece of rotten parchment, but by something much stronger than that, something immortal: they're guaranteed by a whole network of companies itching to sell you that stuff. They've got time (they live forever), plenty of your money, and have a huge hunger for evermore of your dough with interest.

Businesses have become the new protectors of freedom, at least the freedom that most everyone really wants. Freedom means free markets, and that means more fun stuff at even more fun prices: just ask that Wal-Mart smiley face price thingy if you don't believe me. So long as that remains true - and when has it not, come on really! - who cares what some dusty, ratty old piece of paper says in Washington? Certainly not the majority of people who take care of themselves and their own, and, unless a typhoon kills a bunch of people (and charities kick out lots of commercials), are quite content to spend the fruits of their labor on whatever they want whenever they want it. The only people who really care are dreary old un-cool white guys blathering on and on about the Constitution and pony tailed ACLU reps that you just know are only in it for the fame.

Winston Smith may have thought freedom is the freedom to say "2 + 2 = 4," these days try clipping coupons.Seems to me that when you've got a $250 billion+ advertising industry - whose sole purpose, lest we forget, is to amusingly promote business culture and all the shit they're selling - blaring at you as you watch T.V., listen to the radio, read the newspaper or magazine (except this one), surf the web, drive down the highway, or even look at a fucking skywriter, you're gonna start to pick up on the message. Buy shit. Consume. What's good for GM is good for America. Join The Pepsi Generation. Drink Coke. This Is Your Brain On Drugs. Trix is for kids! Think about Numeral Uno. Just Do It. Over time some messages are going to become so reinforced that you're going to start to believe all those ideas are your own original thoughts, rather than bullet points from Big Business P.R. Inc. Pretty soon, they've dumped so much Estée Lauder on the bullshit that it starts to smell likes roses and peaches. Mmmmm, good. Before you know it, Teamsters are voting for Bush.

So how can we blame the teens when all they did is get the message both loud and very clear: freedom is the freedom to Vote with your Visa. All values are equal in the eyes of the Market, there is only one constant: Cash. We've privatized freedom, and whoever can pay, can play. And most everyone can pay, at least a little, at least enough to keep them happily hungering for more. So who really cares if the government censors pictures of coffins coming back from Iraq, what the hell difference does that make to the price of Britney Spears tickets or Clint Black CDs? I mean, duh we already know soldiers are dying. Sure we feel bad, but nobody made them sign up for the Army or anything. They knew it wasn't going to be a Pauly Shore movie, they knew what they were getting in to. Seeing it is just a downer: you're just manipulating my emotions.

Besides managing your credit is really more important than being able to call the President a putz because it gets you what you want: calling some guy names, what good is that? Winston Smith may have thought freedom is the freedom to say "2 + 2 = 4," these days it's clipping coupons.

All of this is by way of explaining why I wasn't surprised. I wasn't surprised because whenever I read about some behavior that's weird and shocking on the surface, I start looking for who's benefiting from it, i.e. the most likely candidate for a cause. They're not hard to spot. They're usually the ones with their hands in your pockets.