It's the 70th anniversary of D-Day today, when America invaded France and began the liberation of Tom Hanks' career.

A lot of people died that day: some were German, some American, a lot were extras being paid scale in the wide shots.  D-Day was the beginning of the end for World War II, but to fully appreciate that, you need to know how it all began. 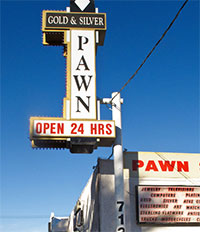 World War 2 was largely started by Germany, specifically a guy called Adolph Hitler. If you don't know who this is, chances are you've only watched the History Channel to see Pawn Stars.  Anyway he decided to start the war because he really liked war, particularly the first world war, which he thought was pretty awesome.  Turns out he also had substantial mental issues but he was pretty good at hiding those from anyone who didn't read the book he wrote, listened to any of his speeches or paid attention to what he did after he rose to power.  He was kinda a crafty bastard.

He wasn't alone either: turns out Italy and Japan were also big fans of war as well as insanity so they decided to join forces with Germany.  They didn't particularly like each other, but they did have a substantial number of crazy ideas in common, so it was more or less an Axis of Convenience.

While all this war was starting up, Britain, meanwhile, had been watching the situation closely and eating a sizable amount of Shepherd's Pies washed down with pee-warm beer.  They hadn't been a huge fan of world wars ever since the first one, and weren't anxious to get into another one.  This was a popular opinion -- one shared by America too -- which lasted right up until Germany began carpet bombing London, forcing Londoners to almost drop their fish 'n chips thanks to all those explosions.  When Britain finally did decide to declare war on Germany it was fully endorsed by both the fish 'n chips and dry cleaning lobbies. 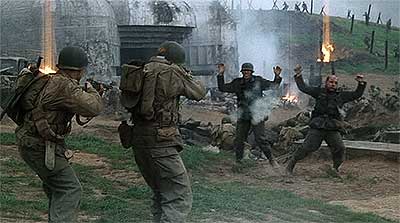 America, meanwhile, was having a great time doing the jitterbug and imitating Humphrey Bogart and had absolutely no interest in flying overseas just to shoot crazy Europeans.  (Remember this was before Fox News existed.)   The last thing they wanted was to be late for another war and have all the other countries complain about how America lets them do all the heavy work and then swoops in at the last minute for the win.

Frankly, America had heard enough of that shit in 1917.

This lasted for a good long time too, through many crazy epileptic dance fads, right up until Japan decided to kill Ben Affleck's character and bomb Pearl Harbor in Hawaii.  Come to think of it, I'm not really sure if Affleck actually dies.  Like most Americans, I never saw that damn movie.

Anyway, that pissed off Americans so much that they overcame both their intense dislike of snooty Europeans AND major world wars and went ahead and declared war on the bad guys.  Yes, in 1941, Europe: go ahead and get it out of your system.

America started fighting with Japan, as they'd both bombed Pearl Harbor and were easier to fight with thanks to Hawaii.  This, quite frankly wasn't working out all that well for America either.  They did manage to get all those guys to hoist up that flag on Iwo Jima, but way before that America lost the Philipines and thousands of tons of ships thanks to Japanese kamikaze pilots.  Some of this was because America was fighting an island nation with a long and proud naval tradition (who apparently had a fondness for triple sec and vodka cocktails), but mostly it was Japan's uncanny ability to hide out in the lush Pacific island forests and ambush passing American troops.  They were kinda sneaky bastards.

However, when America enters a war, it enters a war BIG.  Sure it was fun playing hide-and-seek with Japan in the Pacific, but everyone knew that things were going to really get going when America faced its fears and stood up to the snooty Europeans.  Which brings us back to D-Day, June 6th, 1944.

In fairness, Europe, you did soften them up.