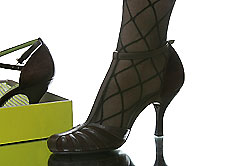 When asked by an IRREVERENT staff reporter known only as “TM” whether perhaps, given the governor's recent statements that  she was tired of the effect entertainers had on the political process, it might have been IRREVERENT Senior Gadfly Tyrone Mercer's recent reference to Palin's daughter, Bristol, staying at the Alaska Home for Unwed Embarrassments that had actually contributed to the governor's resignation, Mr. Meadow spluttered forcefully, “Look, Ty's a great guy and I won't have a word said against him.  Especially within earshot of his lawyer.  But I know the governor intimately, very intimately, and she just wanted to make dirty pictures.  I would encourage porn producers everywhere to jump on this opportunity like a red-blooded Alaska lad jumps on Bristol.  I mean come on.  Did you see the recent cover of Time where she was wearing those sandals with those delicious little purple painted toes?  Oh my God.  Now, if you'll excuse me.”  Mr. Meadow, panting heavily and reaching for a nearby bottle of olive oil, then quickly exited the room.

Tyrone Mercer was unavailable for comment on either his or Mr. Meadow's role in the Palin resignation due to an extended vacation in the Appalachian Mountains of Argentina, but Hashimoto Suntori, Mr. Meadow's lawyer, issued the following inscrutable haiku press release:

“The cherry blossom falls
but the film runs forever.
Can we ever know?”