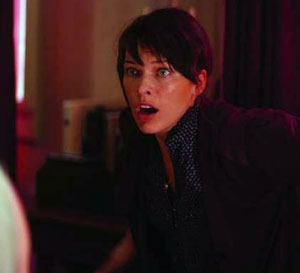 A psychologist in Nome, Alaska (Milla Jovovich) and her husband notice a lot of their patients are having similar sleep disturbances, and a few more than normal are committing multiple murders in this normally quiet, drunken Northern town.  They begin to dig deeper using hypnosis and make everything much, much worse in this controversial sci-fi thriller from Olatunde Osunsanmi, the man with Hollywood's second most improbable moniker next to Manoj Nelliyattu Shyamalan (that's M. Night to you, slappy).

Dr. Abigail Tyler (Jovovich) is a quiet and thoughtful psychologist.  She has a steady practice, until recently with her husband, who was brutally murdered as she watched.   One day she starts noticing her patients are all complaining about having their sleep interrupted by an owl.  An owl, in Northern Alaska, isn't particularly abnormal.  In fact there are 10 different species of owl in Alaska, according to the Alaskan Division of Wildlife Conservation (printed copies of "The Alaska Owlmanac" are availabe for $4.95).  But they seem really upset about it, so she decides to put one of them under hypnosis to see what the hell's going on or at least identify the species.

This, it turns out, wasn't such a great idea.  Her patient describes seeing something terrifying and proceeds to wig out. Eventually she's able to calm him down, before he rushes home to murder his family and commit suicide.  At this point, the sheriff is pretty sure she (Jovovich) is entirely responsible.

About now, more creepy things start happening.  Luckily, everyone has video cameras and tape everything going on, so we get to see some pretty cool stuff like people levitating and the shadow of a flying saucer about to abduct someone from their home.  All of this "home footage" is presented in the film alongside the "movie version," making for a very interesting presentation that gives it an authentic feel.  This also helps sell the movie's central conceit that the movie "is an alien abduction film based on actual never-before-disclosed events," which, of course, it's not.  (Don't take my word for it, though: that's why Google went public.)  Thus the film's "controversy" : is this real or fake?

The fact that the film's distributor settled a lawsuit all but admitting the entire premise was the result of a guerrilla marketing campaign and therefore fake, didn't seem to bother the true believers. "This movie could prove to be very important to UFOlogists and to mankind in general," wrote one supporter on UFODIGEST.com, alongside an ad for a book called "Brain Powers UNLEASHED! Advanced Frequency Harmonic Downloads," in which each word makes sense but thrown together like this makes absolutely none.  "Using never-before-seen archival footage that is integrated into the film, The Fourth Kind exposes the terrified revelations of multiple witnesses. Their accounts of being visited by alien figures all share disturbingly identical details, the validity of which is investigated throughout the film."

Well, there's no point arguing.  The film itself, however, taken as entertainment the way it should be, was way (WAY) more interesting and frightening to watch than "Paranormal (In)Activity," and that in itself warrants a $20 for you and a date.