John and Ben the Bigfoot 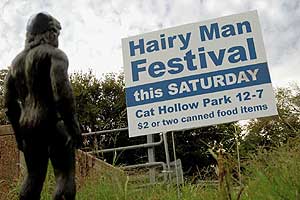 Reader’s note: I wrote this script for a professional comic ventriloquist. Imagine John is the ventriloquist and Ben is the puppet in his lap—in front of a live audience.

John – Hello everybody. I think you’ll agree with me this is a unique experience. An interview with, direct from the lost vastness of the wilderness, Ben, the world’s smallest Bigfoot.

Ben – Do I look like I’m going to play NFL football next year?

John – How did you become the world’s smallest Bigfoot?

Ben – Too much smoking and no sex.

Ben – Isn’t that how you got that bald spot?

Ben – Only alpine lichens. It’s a nasty habit, but I’ve cut back.

John – Alpine lichens? Is that what Bigfeet smoke?

Ben – You get high your way, I’ll get high mine.

Ben – (Looks at the audience) This guy isn’t very bright. Would you have sex with me?

Ben – You see! You see! There you go. Discrimination. You just don’t understand my kind of love.

Ben – You know how hard it is for me to meet anybody, especially women? You see that foxy honey in the third row in the audience?

Ben – You think she’d go out with me? You think she’s interested in a little wrinkled up hairy thing? I go to a supermarket trying to pick up a chick, what do you think happens?

John – You go to the supermarket?

Ben – The produce fruit section is the best place to scout chicks, all the squeezing and feeling. (To the audience). This guy isn’t very bright.

John – So you go to the supermarket.

John – What happens then?

Ben – Some middle-aged battleaxe thinks I’m a Yoda toy from Star Wars, and puts me in her cart. You know how embarrassing that is?

John – I can imagine.

Ben – One time a woman thought I was a sex toy and tried to plug me in. Disgusting! I want to be respected for my mind, not just my body.

John – Well, you are the world’s smallest Yeti.

Ben – Don’t use that term in my presence.

Ben – You should be. A Yeti is some kind of slob white ape running around a mountain in Tibet. I’m a Bigfoot, an All-American Bigfoot. I’m intelligent, and sensitive. My feet are not too big. They’re just the right size for crushing acorns.

John – Could you describe for us the typical day of a Bigfoot?

Ben – First, I usually get up from my bed of discarded musk ox hair. Then, I go to the edge of the glacier and rinse my face in the Pete bog.

Ben – No, the hole where we stuck Pete. He’s a herdsman who died of a heart attack.

Ben – Too much altitude and no sex.

Ben – Well after that, if you’re a Bigfoot, the day is pretty much your own. I can climb into a crevice and scratch my back, or have a breakfast of gnats.

Ben (To the audience). See how he repeats everything I say? This guy isn’t very bright. Yes gnats. We’re big on gnats. Everything is damp and wet in summer. They’re small and very hard to catch. You can only catch one gnat at a time. So a meal is a major commitment.

John – Do you have any hobbies?

Ben – (To audience) There he goes again. Yes. Tree bark. Bigfeet have to go to lower country where the trees are. There are tourists there who try and take our picture. It’s very messy.

John – Do you have any advice for our guests here before we close?

Ben – Yes, never turn your back on a mountain goat and live life to the fullest. Watch for shifts in the ice flow, and, do you think that woman in the third row would go out with me?

John – That isn’t how you talk to a woman.

Ben – It worked on the short tailed weasel.

Ben – Yeah, she can’t say no. Talk about a cougar.

John – Well, there you have it ladies and gentlemen.

John Sammon is an author and general roustabout prone to unusual video outbursts and interviewing severed heads.  His work appears here after a lengthy trial in the 5th Circuit Court and the removal of several restraining orders.  We're damn lucky to know him.