Once again we're at a time of year when we toss all rationality into the snowbanks (or receding toxic hurricane slurry) and believe instead in very bizarre things.  I'm talking, of course, about the belief that an extremely obese man -- in a flaming red costume no less -- will sneak uninvited into our homes while we're asleep (a felony), and -- instead of robbing and killing us -- leave us with a pile of presents and then vanish, leaving everything else we own undisturbed, except for a few cookies and an unrefrigerated glass of milk.  Grown people, with responsible jobs who collectively control trillions of dollars of our national economy, pass this belief along to the smaller people in their households as well, usually accompanied by jovial renditions of their own over idealized stories of years gone by.  These smaller people, besides for the small genetic gullibility inherited from the taller ones, otherwise would have been perfectly capable of becoming rational, responsible individuals with little to no need to believe in felonious fat guys.  Here, have some nog. 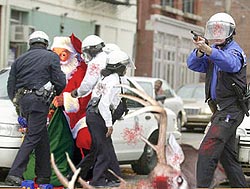 So choking down the curdled milk, we are to believe this fabulously obese man then continues house to house, breaking and entering usually via a chimney pipe, accompanied by a posse of eight wild animals, who themselves commit untold billions in shingle and roofing damage under the cloak of darkness.  This is all done as part of a obviously insane quest to give presents to each and every human child on the earth, despite three glaring facts: 1) only a slim minority of humans ever possess a "chimney," 2) it's impossible to fit the fat guy's enormous girth through such an aperture anyway, and 3) if UNICEF can't reach all the children in 40 years, one winded blimp in a costume hasn't got a chance, especially while consuming billions of empty calories from households that, statistically speaking, are barely able to feed themselves let alone waste dairy products and precious dessert items on criminal fatsos. 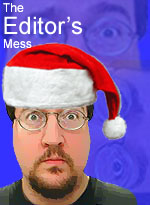 Yes, that's billions of empty calories.  But -- and this is really strange -- instead of instantly volunteering to join "The Biggest Loser" in the hope of lowering his vast cholesterol level, this behemoth runs around proudly flaunting his extreme fatness -- indeed becoming the poster man for morbid obesity itself -- while the world acts as codependent enablers by feeding his food addiction instead of organizing an immediate global intervention.  Not only does nobody feel guilty about helping his public self-destruction, people actually feel pleased and happy about it, it's really quite bizarre.  People who count the calories of each wheat cake and low-fat latte are quite glad to introduce their children to an over-indulgent fattie as a role model for caring.  What's up with that?

Now aside from having a life-threatening eating disorder, this gargantuan guy is also believed to possess -- by the same otherwise sane people with important jobs -- vast psychic ability and an unerring bookkeeping system, capable of cataloging and maintaining billions of people's daily behavioral patterns and then, for some reason, quite possibly storage capacity limitations, reducing them all to a boolean "naughty" or "nice," criteria which are never adequately defined and for which no documented guidelines exist.  No guidelines exist because he himself -- this ginormous criminal mastermind -- is the sole and final judge.  Those who are deemed "nice" by the fatman's secret criteria will receive desired gifts and those declared "naughty" are punished by receiving only coal or nothing at all.  Again instead of rebelling against this arbitrary standard of behavior, everyone is fine with it and this bizarre fatty's benign worldwide fascist dictatorship continues to rule human behavior, especially small ones.

Yes, no matter how you cut it, this is an extremely strange set of beliefs. You want a really disturbing thought?  The people who believe in this stuff vote.  That's right. In large numbers.

Here have some more brandy.

Glad I can offer something to reflect upon during this holiday frenzy of mass public consumption, when you're not, you know, figuring out how to tell your significant other that the explicit gag gift from Spenser's: a) cannot really be used as directed, no matter what the packaging says, and b) had no place being opened in front of your mother.