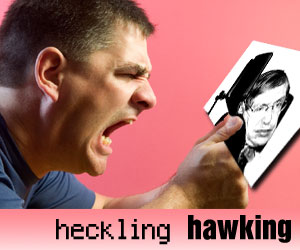 Recently, Professor Stephen Hawking (yes, the real one) posting on “Yahoo! Answers” asked the world, or at least us internet rabble: “In a world that is in chaos politically, socially and environmentally, how can the human race sustain another 100 years?”1 In case you’re not familiar with the service, “Yahoo! Answers” allows anyone to post a question on anything and then have a bunch of yahoos “answer” it. In other words, imagine what would happen if you dumped a herd of lobotomized philosophers out on a deserted island for six or seven decades with nothing but high-speed internet connections, broken keyboards, and enough reefer to get several Bob Marley concerts higher than ozone.

I personally found it inspiring that Professor Hawking used the site to post such a heavy question. However, as if often the case with internet message boards, when I read the responses it totally harshed my buzz.

Before I give Stephen my own answer, it’s interesting to look at what others wrote. There’s over 15,000 "answers" so far, and I’m a writer with an article to write, so I didn’t read each and every one but I did poke around to find some that seemed representative of the lot as far as I could tell by aimlessly surfing around with four or six scotchs under my belt. Call it a scottish polling sample. Here they are:

"how about TRUST IN JESUS CHRIST, pal!"

"Adapt and overcome; specific strengths and advantages will be selected for, and the weaker will perish."

"Can you tell me a time when the world was not in chaos politically,socially and evironmentally. Then i will tell you how the human race will survive the next 100 years.The world was in this state from day one."

"dont matter to me cuz i wont be alive that long."

"we should all be less selfish."

"We will not be alive in the next 100 years because Our Lord Jesus Christ will be coming back sooner than that."

"Dr. Hawking, Thanks for paid the visited to Hong Kong! Best Wishes!"

"If you are so smart why are you asking us!
You should have read Revelation in the bible, God is not going to let the earth be destroyed for 2000 more years, at least!"

"You propose because George Bush and Al Gore don't like each other the world will end? Dude, you might re-think that perfessional credential before you post these."

"nothing will happen till the antichrist comes"

"move to the moon , or other planets"

"THE REAL QUESTION IS ARE WE MEANT TO SURVIVE."

"Great question. I am not exactly sure."

"Only if and when we get back to our past."

"The world will VOTE REPUBLICAN” 2 [sic]

All in all, your standard internet message-board response full of ALL CAPS SCREAMERS, bizarre "Engrish" multi-nationals ("Dr. Hawking, Thanks for paid the visited..."), typos galore, blatant logical fallacies, boiler-plate eccentrics spouting conspiracy theories, cookie-cutter ideologues with an axe to grind with either Democrats or global capitalism (“the world will vote Republican,” “we’re dead unless we stop the selfish corporations from poluuting our world [sic]”), and plenty of thoughtful folk writing novella length dissertations on “life, the universe, and everything,” as if Douglas Adams hadn’t already covered that ground with better jokes.

Yet among this digital flotsam, I did see some patterns. I was struck by the preponderance of religious and faith-based answers: not because the respondents where largely American, which they undoubtedly were and we're very religious, but because looking to God to save the race is tantamount to saying there’s nothing short of a miracle that’s going to do the trick, and that’s a pretty hopeless viewpoint in my book. There were also quite a few people advocating moving to other planets or moons, also throwing up their hands and calling it quits. More than a few suggested that this epoch was no different than any previous one, so therefore the species would continue just fine and dandy, which may be Pollyannaish but at least it’s optimistic. Many suggested that we will not, in fact, survive at all. Then the dissertation writers chimed in, as they tend to do, with elaborate blueprints for the survival of the species that I’m convinced they’d been working on secretly for years already and have just been waiting for the opportunity to share with the world. You know just like The Patriot Act.

Overall, my impression was that the majority of the 15,000+ responses were pretty pessimistic about the next 10 decades. If God doesn’t swoop down from the clouds in a fiery chariot, we don’t learn to live in global harmony under the benevolent hegemony of the United Nations, or we can’t figure out how to move 10 billion or so humans to Titan in the next few decades, we’re up a creek with a busted paddle and someone’s playing “Dueling Banjos” uncomfortably close to our canoe. Squeal like a pig, humanity!!

Can we really be that screwed? I mean, I haven’t seen “An Inconvenient Truth” yet, but is our species really doomed with a countdown ticking that fast? I guess nobody can really say that it’s impossible that our race will blink out in the next hundred years, and be able to back it up with something not in ALL CAPS, but it seems very unlikely to me. We may run out of oil. New Orleans may become our very own Venice. Jerks may, and most probably will continue to rule over all us small folks way down in the machinery of civilization to perpetuate their own power. Statistically speaking, people – just not as many white people in America and Europe – will continue to have lots and lots of sex leading to lots and lots of babies. We’ll have to figure out a way to feed and educate them all and that may mean that we’ll need to stop making Stealth Bombers to vaporize stone-throwing terrorists, but that’s certainly not a sure thing. All that may come to pass or maybe it won’t or maybe it’ll be something else, but I’m pretty sure we’ll find a way to cope. Come on, we’ve dealt with George W. Bush for almost 8 solid years, how bad can the Anti-christ be?

As a species we’ve adapted to every climate on the planet and have boatloads of ways to organize ourselves to get stuff done. Granted, some are pretty bad ways that involve brown shirts and murder squads, but we have other ways to organize too: some involve forming unions, some involve slavery (see the pyramids) and others working at Wal-Mart while moving tech support to India. For me, the useful question isn’t whether or not the species will survive – if it can survive the last million years, I think we’re okay with the next 100 – but how it will reorganize and transform itself with the changes that are coming our way. That answer has profound political and economic implications, not to mention interpersonal repercussions that may turn us into something more like Waterworld or Tank Girl and less like Star Trek.

In any case, there’s one thing I can say with a great deal of certainty: the human race won’t survive if it looks for the key to its survival on “Yahoo! Answers.” You’ll find plenty of ammunition for world girding conspiracies involving an Illuminati-resurrected JFK living in Zurich, but not much on how humanity can cope with global warming. But, on the other hand, if you’re really interested in how many skittles can fit into a human penis (within certain specific dimensions) 3, then Yahoo! has The Answers for you.

2 Yes these are actual responses to Professor Hawking.

3 The actual question was: “How many skittles can a 6 inch long and 1 inch thick [penis] fit?” Some other gems include: “What is heart of the world?”[sic], “Why am I so fixated on women in general when they cause me so much grief?”, and “What is the importance of microbiology?” Just in case you’re as curious as I was, one ALL CAPPER responded to the women question, and I quote: “THEY DRIVE ALL MEN NUTS. THAT IS WHAT THEY ARE SUPPOSED TO DO.”