ATHENS - In the latest round of austerity measures, a desperate Greek government listed the Parthenon for sale. 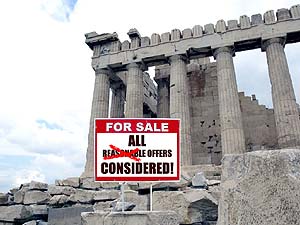 The listing will first appear in targeted, high-end magazines known to be read by the worlds wealthiest individuals and families. Failing to attract attention here, the listing will go out to general interest magazines worldwide. Failing that, craigslist.

"We are hopeful that our three-pronged marketing strategy will ultimately result in raising much needed cash for our country," said Prime Minister Alexis Tsipras through an interpreter. "Our options are very limited. I was recently turned-down for a Mastercard from Chase, and that was our fall-back plan. We're in bake-sale territory now."

"From a practical standpoint, what's all that old crap really returning for every dollar they're spending anyway?" asked Greg Blatt, a global financial analyst with Barclays in London. "Bad investments to my way of thinking. List the lot of it and get some cash in there now. I'm sure someone will be stupid enough to buy a bunch of old rocks."

Nevertheless, Greek government official are hopeful that the ad will attract "substantial" investment in Greece, once they finish emptying out the change jars from local merchants in order to purchase the ad.

"The Parthenon is one of antiquity's greatest gifts to the modern world," reads the preliminary ad copy, "and now it can be yours! Imagine the bragging rights you'll have with your fellow elites as you lounge among the ancient ruins, or embark on a bold new restoration (or even re-imagining) of Athena's sacred temple!"