CLEVELAND - Speaking from the podium at Cleveland's famous Quicken Auditorium and Beer Garden, presidential hopeful Donald Trump last night formally accepted the nomination of the Republican Party calling on all Americans to "brace themselves... for the upcoming era of amazingness, really amazing amazingness, amazing things." 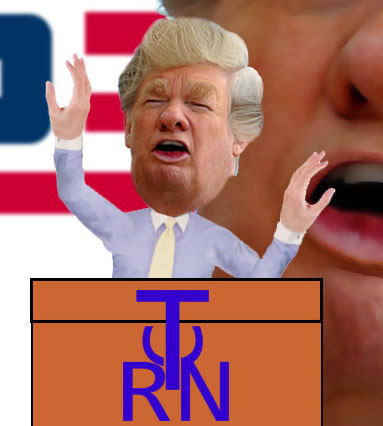 "So many amazing things will be absolutely amazing, it's amazing," Trump said during his 75 minute speech.  "But terror lurks around every corner.  Foreign people, Muslims are everywhere, hiding, hiding in the shadows, and they must be stopped.  There are literally, and I know this for a fact, a fact, this is a fact, there are dozens of car bombs literally right now, right NOW, ready to kill hundreds of Americans in all our major cities.  These bombs are from terrorists, and those terrorists come from overseas, or somewhere else, usually, except for domestic terrorists but I'm not covering that tonight that's a different speech later, trust me you'll love that one too."

Trump went on to say he was going to "renegotiate all of America's major trade deals," "restore law and order in America," and "permanently ban... red traffic lights, they're communistic, and will be replaced by red, white and blue lights immediately after I take the oath of office next year, mark my words you'll see it.  I may even make the call from my limousine afterward, on my way to the white house, I think it's just that important.  I hate those things.  I hate anything that tells me 'no,' they're just losers."

During most of the speech, however, Trump trashed Democratic front-runner and presumptive nominee Hillary Clinton for, among other things, being "a really bad person... who used her own email server, whatever that is, to do classified things and it's just terrible."  "Hillary Clinton is no more fit to be president as Trump University is to graduate, well anyone I'd hire in all honesty.  See I can... I can be funny too, see, I know.  I know.  Not all ideas are great ones, which is why I have so many, so many, seriously I've only shared about 10% or less of my great ideas with you, the American public so far, and each and every one of them will usher in a new era of Americanism properitiness, a whole bunch of prosperity, where bankruptcy laws are brought back to really making sense and protecting the small businessman from greedy creditors and business partners, who are always trying to screw me anyways."