President Rates His First Few Weeks as 'Excellent,' America 'God**mn Lucky' to Have Him

WASHINGTON - President Donald Trump praised himself on Friday for doing an "excellent, truly excellent" job during his first month in office.  "America, you are god**mn lucky to have me," the President noted with a smile. 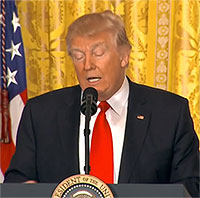 Without pausing the President then launched into his daily soliloquy, today's a celebration of himself.  "I have shown everyone what a decisive leader I am, really great, so great I've even surprised myself how great I am," Trump continued, smiling to himself.  "I've kept every single one of my campaign promises, just like I promised, and flawlessly executed every single plan I put in place, remarkable!  You are so, so lucky, America.  Truly, truly lucky. You made a GREAT choice, really great.  Everyone who voted for me and supported me, all over the world, should congratulate themselves, truly.  You elected a winner.  Nobody is a bigger winner than me, and I'll always tell you the truth, always, anyone who says anything else is a liar and FAKE NEWS."

If my brother or whatever went to Koala Lemur [sic] where those little bears are, very cute, very cute those bears, and got killed or something, there's no WAY I'd let that stand.

Again, without pausing for a breath, "Even my kids are winners, thanks to me, really, if you think about it.  My wife, the first lady, WINNER.  Duh she's my wife, a total winner, I wouldn't marry anything less, trust me.  They all got great deals thanks to me, great deals, the best deals in the world really.  We're nothing like North Korea for example either, nothing, nothing.  If my brother or whatever went to Koala Lemur [sic] [Kuala Lumpur] where those little bears are, very cute, very cute those bears, and got killed or something, there's no WAY I'd let that stand.  I don't believe this guy [North Korean leader Kim Jong Un] is letting this go. He's got missiles!  But you guys in the press you'll never report it, never.  Very dishonest people, you guys."

The President then continued to praise his recent cabinet picks, emphasize how "semitic" he was because he "loved Jewish people" like his "good pal Bibi" [Israeli Prime Minister Benjamin Netanyahu], point out how badly Arnold Schwarzenegger tanked the ratings on his old T.V. show "The Apprentice,"  how "lucky" his children and grandchildren are to "have just known [him]," and finally reiterating how "amazingly lucky" citizens of the United States were to have a "great man like [him] running the nation," except for "illegals" who will be "rounded up and deported shortly" with the "help of the military."  Smiling he then added, "Just kidding" with a wink.

After a lazy Friday morning trading session, Wall Street ignored its news feeds and instead focused on screaming at "Stan," the Street's hard-working CPA, throughout a disappointing lunch at Augustine in the Beekman.  If the Street was going to pay $25 for a whiskey burger, it damn well better get him tipsy, was the general complaint throughout the meal, shared with long-time on-again-off-again companion the FTSE.