The President's aides hastily called the news conference when Chief of Staff Rahm Emmanuel noticed several former Rocky Mountain News reporters, some wearing “Will Write for Food” signs, lined up with other hopeful day laborers outside the popular home improvement store.  “What the hell,”  Mr. Emmanuel was quoted as saying, “Might as well throw the poor bastards a bone.”

In his remarks Mr. Obama told the formerly ink-stained wretches that his new plan would address two problems at once.  “The first thing we have to do is get people like you working again.  Not just in menial low-wage jobs, not in blue jobs or in red jobs, but in real jobs, good jobs, jobs that will rebuild the infrastructure of this economy.  The second thing we have to do is ensure, with GM in bankruptcy, Fiat purchasing Chrysler, and financial institutions falling all over themselves to pay back TARP money, that Treasury Secretary Geithner has enough large holes to throw huge sums of cash into.  To that end I'm happy to announce today the creation of the Help Our Lousy Economy Soon program.  At the White House we like to call it HOLES.”

The journalists, flexing their skepticism for the first time since the Invasion of Iraq(TM), pressed Mr. Obama for details.  “Well it's like this,” said Obama.  The Treasury Department is running out of rat holes to pour money down.  These new jobs will help alleviate that problem by creating a corps of workers not just red workers, not just blue workers, who, under the direction of the HOLES czar, will be charged with excavating giant money pits for the Treasury's use.”  When asked how these jobs would be related to the medical sector, President Obama replied, “The holes will be located near hospitals and medical research facilities.  Preferably facilities conducting research on stem cell therapies.”  The President's answer prompted a follow up question concerning how his new program could be expected to help former journalists.  “While it's true,”  Mr. Obama responded, “that all journalists, not just red journalists, not just blue journalists, are physically unable to handle the demanding physical labor, this jobs program will have attractive side benefits.  The key one, from your perspective, is that it will allow you to continue using the phrase 'green shoots', when referring to the economy.  This despite it's current listing as a Class 3 controlled cliché.  Now, who wants ice cream?” 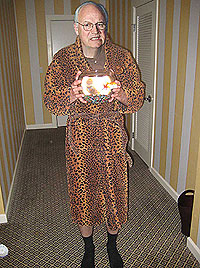 Republicans quickly responded to the president's proposal by trotting out their own well worn clichés “We believe that this program is another example of wasteful, fuzzy-headed, liberal group think, spendonomics.” said Republican Spokesman Newt Gingrich.  Republican Spokesman Rush Limbaugh also chimed in on his radio program taking the Obama administration to task for “once again engaging in spendonomic, liberal group think, fuzzy headed wastefulness,” and Republican Spokesman Michael Steele deplored what he saw as “liberal, fuzzy-headed, wasteful, spendonomic group think.”  Republican Spokeswoman Sarah Palin, reached for comment while visiting her daughter at the Alaska Home for Unwed Embarrassments, announced that she would run for President in 2012 in order to fight “not only David Letterman,but also fuzzy liberals and their lipstick wearing pit bull.”  Presumably a reference to Hillary Clinton. Former Vice Presidenté, now Republican Spokesman, Dick Cheney, speaking in between bouts of lucidity from his new room at the  Old Scary Guy Retirement Home and Lawyer Hunting Lodge, said “They want to create jobs in the medical industry?  They need to stay in Iraq!  Nothing creates medical jobs like wounded GI's!”

Reaction to President Obama's remarks were mixed on Wall Street where Under the Table, INC (UTI), suppliers of third world immigrants with shaky documentation, closed up 200 points while Suburban Outfitters, (SO) a clearinghouse connecting day laborers with wealthy employers closed down on fears of increased competition for day labor driving up wages.