Man Fails to Save With Coupons

CONSUMERVILLE, FL--As prices for consumer goods continue to climb, several shoppers are trying to ease the crunch by becoming super coupon clippers.  Unfortunately for Wally Shepard of Dotsville, Iowa, the promised savings failed to materialize.  His grocery bill, previously $50 a month soared to $300 dollars a month once he began clipping coupons. 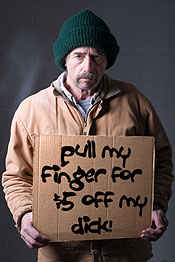 "Look, since my early retirement from Maytag in 1998, I've been on a fixed income," said Mr. Shepard.  "I had heard about these so-called coupon queens who can slash their grocery bills up to 75% by using manufacturer coupons they clipped from the newspaper.  Well hell if a bunch of broads can do that  I reckon I can get up to 76% easy."

Eager to become a coupon king, Mr. Shepard began clipping every coupon he could get his hands on.  In a perverse reversal of fortune, however, he found his grocery bills skyrocketing.  "I don't know what the hell happened," the impoverished Mr. Shepard says, "I mean I'm 72 years old, I should know what's what, but I'll be damned if I can figure out how I went broke buying Pampers at $2.00 off.  Or how in the world I managed to spend 20 bucks a week on discounted crab legs.  Hell I don't even eat seafood.  Well I ain't taking this lying down.  I just found a coupon for a free legal consultation.  I'll show those coupon guys to mess with Wally Shepard."

A spokesperson for the Coupon Printing Trade Association, speaking from the group's headquarters in a Brooklyn alleyway said that Mr. Shepard's complaint was without merit.  "Yo, what the fuck? Is dis mook a fuck 'tard or what?  What does some ol' fuck in fucking farm fuckin' country know about clippin' fuckin' coupons.  Fuckin' Christ on a fuckin' crutch!  I oughta break his fuckin' face that's what I oughta do."

"Well it's clearly a case of non couponus renderus," said Fritz McDarling, a legal expert completely unfamiliar with the issue.  "The coupon clearly states that the redeemer will receive HUGE HUGE SAVINGS.  Now whether the consumer actually needs the items he's buying has no relevance.  Justice demands that he receive HUGE HUGE SAVINGS.  Of course, it's possible that the consumer in such a case should indeed have his face broken.  Thank God the courts can sort it out."

While Mr. Shepard awaits his day in court, his coupon clipping ardor has cooled.  "Well I couldn't afford it.  I mean the way gas prices have jumped and all I couldn't drive fifty miles to the nearest store, and buy groceries, and pick up my Cialis and pay for some time with Bossie, my favorite gal down at Udderly Delicious.  I mean something had to give.  I still clip a coupon here and there but until I can figure out what to do with fifteen bolts of damask silk I think I'll keep the scissors in the drawer."

Wall Street, already feeling a little blue due to the rising cost of anti-depressants, responded with a sharp drop off on the news that coupon clipping may not save money.  The Heng Seng advised the Street to "c'mon lets just lie down naked and take a nap.  Nothin'll happen I promise."  But the market still failed to rally.
Tweet
Share