Joker trades in his feeble-minded pranks from the 60's for TNT and runs amok in Gotham, while Christian Bale tries desperately to hold his own in a scene in Christopher Nolan's next phase of resurrecting one of comic's most abused franchises. 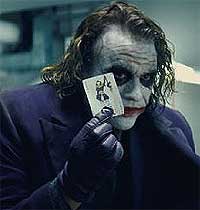 Unless you're an out-of-work thug, things are going pretty great in Gotham. With the new tough D.A. Harvey Dent (Aaron Eckhart), and the impending threat of being beaten up by a scary guy in a cape and mask, the bad guys are running scared and looking for a safe haven for all their ill-gotten gains. So they get the great idea of sticking all of their money -- hundreds of millions of criminal dollars -- into one huge, slushy fund managed exclusively by a slimy Chinese guy named Lau (Chin Han). Lau, you see, is "good at calculation," which somehow convinces the entire criminal underworld of Gotham to trust him with every cent they have. The bad guys, you see, aren't very good with numbers.

[amazon product=B001GZ6QDS pos=right][/amazon]Enter Joker (Heath Ledger): a strange twist to Gotham's more normal sociopath elite, the Joker makes a comfy living ripping off the mob until it seems more fun to join them destroying the city and taunting Batman. He's got a pair of brass ones and waltzs in on one of the mob's sit-downs in order to lay out his plan for increased anarchy by murdering Batman. They take him up on the offer, and chaos ensues.

See the Joker holds the position that people, for the most part, are dumb, weak, scared little sheep who'll do anything to save their own tails. Push them far enough, and their entire "moral" system collapses. To prove his point, he sets up a series of homicidal experiments, using Gotham as his laboratory, and Dent, Batman, and Gordon (Gary Oldman) as test rats. For the most part, he's right but that's a different blog.

If you're the sole remaining person on the earth who hasn't seen The Dark Knight, let me urge you to do so. Ledger's Oscar™ winning performance is amazing, the story is truly epic, and unfortunately it will remain the one and only time you'll be able to see The Joker as he should be.