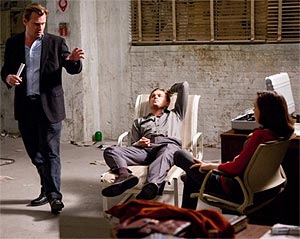 How hard is it to make someone form an idea that you suggest?  That's the subject of Inception, Christopher Nolan's latest foray into semi-confusing jump-cuts, flashbacks, and asynchronous story telling ala Memento.

It's sometime in the near future, and mankind, for some reason that's not entirely clear, has developed the technology for people to jump into the dreams of other people.  Unlike 1984's Dreamscape, however, this time nobody has to be a tortured psychic longing for redemption to do it: now you just hook up some electronic gizmos and you're off.  You can even do it sitting next to a guy on an airplane.

Like most new technologies -- especially those that are perfect for hardcore abuse like this one is -- a shadow economy has developed. In this one, trained dream invaders hire themselves out to the highest bidder.  Enter Cobb (Leonardo DiCaprio), a dream ronin looking for redemption.  Desperate to see his estranged kids again, Cobb takes a conspicuously dangerous final assignment for a rich corporate clod (Ken Watanabe), who wants Cobb to plant an idea in the mind of a business rival (Cillian Murphy).

No, that's not the same guy from Sixteen Candles.  That's Gedde, this is Ken.  Yes, I looked it up.

So anyway the race is on.  It soon becomes obvious to the team that Cobb has some serious issues, namely the very destructive memories of his dead wife that inhabit his subconscious.  See, one of the neat things about invading people's dreams is that you get exposed to all the crap in their mind, not just the fun stuff you're looking for.  So being a dream invader with a ton of heavy emotional baggage makes you not a particularly effective dream invader.

Nevertheless, the show must go on and the team embarks on the "inception" assignment: planting the thought (in a business rival) that he should break up his inherited business conglomerate so that the corporate clown (Watanabe) can clean-up in the aftermath.

It's gonna be dangerous too.  See, the guy (Murphy) has underwent some anti-dream-invader training, which has turned his subconscious projections from stylized versions of Megan Fox and the Victoria's Secret lingerie models into pissed off, gun wielding thugs designed to attack dream invaders like our gang.  In order to succeed, they're going to have to go "three levels" deep, which means getting into the guys dream (level 1), then invading the guy's dream inside the dream (level 2), and then invading the guy's dream's dream (level 3).  Why?  Well, it's more interesting.

Things progress, Cobb (DiCaprio) finds his redemption, and the guy (Murphy) seriously considers suing the bozos he paid to protect him from crap like this in the first place.

Interesting, if sometimes difficult to follow, Inception is worth a twenty for you and a date, but will probably do better on Blu Ray.