Arthur Fleck is a heavily medicated guy with Tourette's syndrome and a fulfilling fantasy life who works as a clown in Gotham City.  He does typical clown stuff like spinning signs outside a store that's going out of business, murdering three Wayne Enterprises yuppies, and taking the gun into a children's hospital to cheer up the kiddies.  He's also an aspiring stand up comic: "aspiring" in the sense that John Belushi aspired to cut back on the coke.  His only discernable joke is a "knock-knock" joke, the punchline of which is him committing suicide.  Turns out he's not doing so well on the stand-up circuit.

Meanwhile, Gotham City has become a real piece of crap.  New York-style garbage heaps litter this crime infested landscape of jerks, whose singular preoccupation it seems is to beat up Arthur Fleck.  Even kids take a piece of him as he just tries to live his psychotically-delusioned life among all the unsympathetic jerks that infest this horrible city.  So pretty much New York. 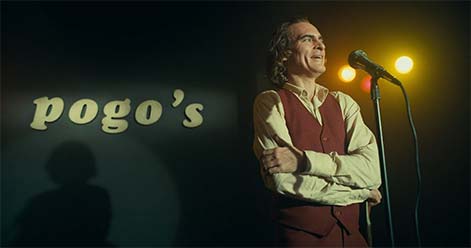 Anyhoo, Arthur gets fired and finds himself a great new girlfriend (Zazie Beetz), a single-mom who bizarrely seems to care for this troubled guy.  Arthur's mother (Frances Conroy) gets sick, prompting Arthur to take care of her and do a little genealogy in the form of opening his mother's private letter to billionaire Thomas Wayne (Brett Cullen).  The letter reveals that Arthur is Wayne's illegitimate son, which forces him to freak out and crawl inside his refrigerator, as one does.  He confronts his mother, who tries to explain how much in love they once were, Arthur storms out and straps on his Sherlock Holmes hat to get to the bottom of all this.

He starts by stalking Bruce Wayne, Thomas's kid, who at this point has the street smarts of granola.  Arthur attacks him, the boy's butler intervenes, and he runs off to Arkham State Hospital to fact check something the butler tells him.

Turns out Penny (Arthur's mom) is nuts and made the whole thing up.  This forces Arthur to freak out again.

Meanwhile, back in Gotham City... jerk talk-show host Murray Franklin (Robert De Niro) has been harassing Arthur by repeatedly playing a video clip of Fleck's horrible stand up set that makes simply bombing look like "Eddie Murphy Raw."  Of course, this pisses off Arthur, who is surprised to learn that Franklin (De Niro) wants to have him on the show to humiliate him further.  Of course Arthur agrees.

Somewhere around here BOFFO!! Remember Fleck's girlfriend (Beetz)?  Turns out he imagined the entire relationship! That's right, she's not even his girlfriend!  Just like his mom he made the whole thing up!

Anyhoo, Fleck decides to kill his mother and get ready for the Franklin show, which is taping soon. 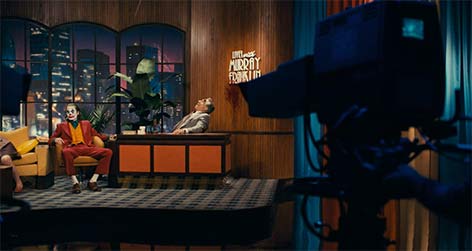 He dons the clown makeup again and heads down to the studio, where jerk Franklin and his producer meet and lightly harass him further.

Finally, it's time for Arthur Fleck to go on, the curtain opens, he makes a grand entrance, and ends up murdering Franklin live on-air in front of a studio audience.

He's eventually arrested, and the city erupts in violent chaos, cementing Fleck's position as king of the criminal nutbags. 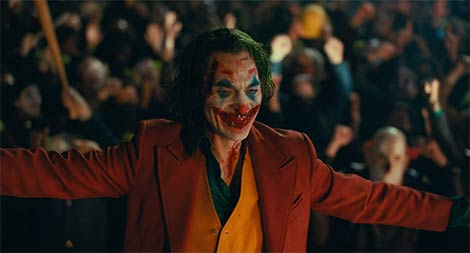 Yesterday Joaquin Phoenix won the Golden Globe for his portrayal of "Joker" despite the controversial reception it had initially.  Apparently authorities were scared that the movie would inspire people to do stuff like the Joker did in the movie, in accordance with the advanced sociological principle of "monkey see monkey do."  It didn't happen, but that's not to say there's not a lot of truth in both the Fleck character and Joaquin's performance.  At one point or another society treats everyone like crap, especially those with mental conditions that make them even more different.  Difference isn't something to be feared, but all too often that's the case.