Aliens dupe humanity into building a trillion dollar machine that they don’t understand in the hopes of some sort of revelation about life, the universe and everything, then savagely snatch it all away in this 1997 adaptation of Carl Sagan’s eponymous novel.

Dr. Ellie Arroway (Jodie Foster) is a lonely scientist on a lonely project to search for extraterrestrial life in Puerto Rico.  She kills time listening for signals and has one-night stands with strangers, including a random religious guy named Palmer Joss (Matthew McConaughey), who’s writing a book about religion and science something. 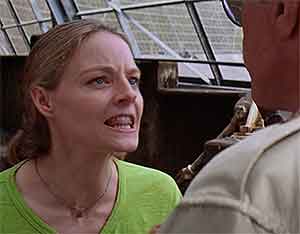 Meanwhile the search for E.T. is an abysmal failure and just as her once promising career spirals down the proverbial crapper, thanks to her mega-jerk boss David Drumlin (Tom Skerritt), she gets one more lifeline from bizarre engineer turned bizarre industrialist S. R. Hadden (John Hurt).   Ultimately even that turns out to be a catastrophe when her dumb boss (Skerritt) again steps in to ruin her life.

Then, just as all the chips are down, the fat lady’s singing, and she’s all-in and drawing dead with a busted flush, the unimaginable happens: suddenly she discovers the extraterrestrial signal she’s been waiting for her whole life.  I guess aliens understand dramatic structure too.

Immediately the government clamps down on her fun, especially after seeing the associated video transmission featuring the infamous German dictator of World War 2 fame.  No I’m not putting his name here for search engines.

Her jerk boss (Skerritt) weasels his way into leading the effort he once poo-poo’d as a colossal waste of time, and all heck breaks loose as humanity finally has proof that it’s not alone in the universe, and they’re watching human T.V.  One can only speculate on what they’ll conclude about human beings when “Gilligan’s Island” starts playing. 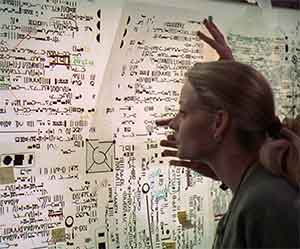 So Jodie and the gang of newly purposed cryptographic experts go about the incredible task of making sense of all the crap being broadcast by the aliens, thousands and thousands of pages of stuff, and again, it’s a disaster.  They’re getting nowhere fast, that is until again S.R. Hadden (Hurt) swoops in.  His bizarre energy and quirky genius, see, have figured out what legions of top scientists couldn’t: he has the “primer,” the key to figuring out all the alien nonsense they’ve been jamming down the pipe at us.

Turns out the alien dudes faxed down some blueprints for some sort of machine but neglected to tell us what the heck it was.  This leads to all sorts of paranoia, especially from Washington establishment-debbie-downers like Michael Kitz (James Woods), who delights in dreaming up the absolutely worst case scenarios throughout the film.

Anyway we humans decide to build it despite being clueless as to what it actually does.  Then the race is on to see who will take the ride in the biggest, most expensive single-seater carnival ride in human history.  Fortunately Jeff Bezos and Elon Musk are otherwise occupied by their own pet projects apparently, and the governments of the world decide to select an occupant based on some sort of merit.  You’d think that Dr. Arroway (Foster) would be a shoe in, but she gets torpedoed by her spiteful ex-lover (McConaughey) and the job goes to her jerk ex-boss instead (Skerritt). 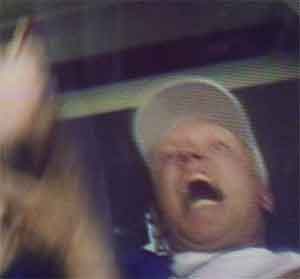 However in the background, humanity has been coming to terms with no longer being the center of the universe (literally), and not handling it very well.  Religious folks are going nuts, particularly Gary Busey’s kid Jake (Joseph in the movie).  They don’t like the idea of aliens running around god’s universe, since that chapter was left out of the bible and asking the pope is a hassle.  So they decide the best way to show god’s mercy and love is to ruthlessly murder dozens of people by blowing up the machine via a suicide vest.

With the machine destroyed, you’d think that about wraps it up for humanity figuring out the purpose of the universe.  But don’t be so stupid.  Of course they built another machine, identical to the first but totally in secret, and hid it off a Japanese island.  You know one that Godzilla has yet to ferret out.

This time Arroway’s in, she straps in and takes off on a whirlwind journey throughout the cosmos, during which none of the big universal questions get answered.  She returns home without any proof of the journey and the aliens she’d met, including one who impersonated her dead father in a bid to make her “feel better,” presumably because seeing the alien’s true form would cause Jodie to scream until she passed out from unspeakable horror.

Back home people are pissed.  What happened to their trillion dollars?  This isn’t some bank bailout, folks should actually have something to SHOW for this trillion!  They’re demanding answers and heading the charge is our continuing baby-McCarthyite-doof from Act 1 Michael Kitz (James Woods).

Through a highly televised interrogation of our protagonist, Kitz calls the entire debacle a “hoax,” from the faked alien message to the imaginary journey down memory lane with her fake alien dad.  He blames it all on the Machiavellian machinations of Hadden (Hurt), who just died and was therefore great for being a scapegoat, so now Kitz can build his own personality cult around denying aliens exist and run for president.

Well turns out that she probably wasn’t lying and hadn’t been duped, and in any case things settle back down.  Arroway goes back to listening for additional alien broadcasts, and Kitz probably ends up with the second most popular syndicated conservative talk show in the southern U.S. 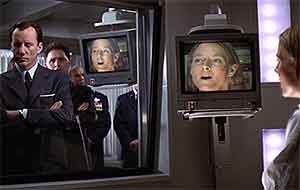 Although that’s where the movie ends, there’s still a lot of interesting questions laying around.  So what happened next with the machine?   Especially in light of current times, it’s completely believable that at least 50% of people would continue to believe the whole thing was a hoax and continue to deny the existence of aliens because someone on T.V. said so.  Was the thing junked?

Even with the bible-belt denying everything, there must be a bunch of scientists who could prove the signal really was alien and not some satellite broadcast.  And looking further at all that data, I’m sure they could find something more revealing about the nature of the universe than just instructions to build the machine.  Does this all become it’s own underground “religion,” belief in the alien signal and integrity of the machine?  Do groups of rouge scientists, fearing for their lives from religious fanatics, build mini-versions of the thing and go hopping around the cosmos discovering stuff?

That would be cool.

It’s almost been 25 years since the original movie, so I think a sequel is unlikely, but it’s pretty amazing at how well the basic dynamics of the story – religious dogma versus scientific rationalism, and how easily ignorance is exploited by political opportunists – still stand up today.  And by amazing I mean depressing.