As we all hunker in our bunkers this year, scarfing down microwaved turkey dinners and staring into the middle distance to Dark Side of the Moon, I thought it would be interesting to look back at Thanksgivings past to get some perspective.  COVID has given us plenty of time for reflection, and that’s rarely a good thing. 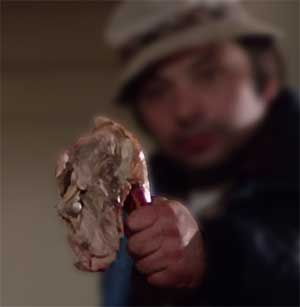 I think we all have an idea of what Thanksgiving should be.  We don’t see it in reality, but it’s there in myths and legends, fed by advertising campaigns and old movies.  “Sure, my Thanksgiving is a dumpster fire,” we think, “but somewhere out there people are having a great time and eating noodle salad!”

The fact that other people out there are normal is comforting.  It’s kinda like Bigfoot: you never see him yourself, but it feels good to know some grizzled prospector-type guy is out there with a flashlight and his phone looking for him. We want to believe.

Or so we thought.  I mean, what inhumanely torturous process turns cranberries into gelatinous slop anyway? Do we really know anything?

Turns out that the Thanksgivings shown in a lot of movies aren’t the romanticized versions from our advertising-addled cranium.  In fact, some have a downright horrible lesson, right there in front of us the whole time but we weren’t paying attention.

So crank that guitar rift, sit back and choke down that disgusting jellied cranberry sauce from 2018 as we explore some darker lessons Hollywood has secretly taught us about our favorite turkey day over the past 40 years.

Plot: A punchy southpaw improbably gets a chance at the heavyweight championship title when the greedy and overconfident current champ sets up a bicentennial publicity stunt.  Along the way, he falls in love with a mousy pet-store worker and beats up her brother over the holidays. 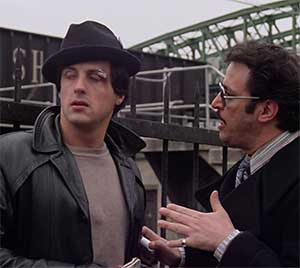 Rocky (Sylvester Stallone) is a simple guy.  His modest education and inarticulate shambling give him a loveable charm and honesty admired by everyone around him, including the local loan shark who pays the brute a pittance to pummel guys who owe him money.  He works diligently on his craft taking massive beatings and doling out punishment at local boxing matches while working out at the gym and being taunted as an incoherent ape who will never amount to anything.

Enter Apollo Creed (Carl Weathers), the current heavyweight champion of the world and full-time jerk.  He’s got a problem: for some reason, he can’t find any other boxer on the planet to fight for the title during the contrived bicentennial publicity stunt he’s concocted to stay relevant.  Digging straight to the bottom of the barrel, lo and behold Rocky’s name pops up because he’s got a marketable name. 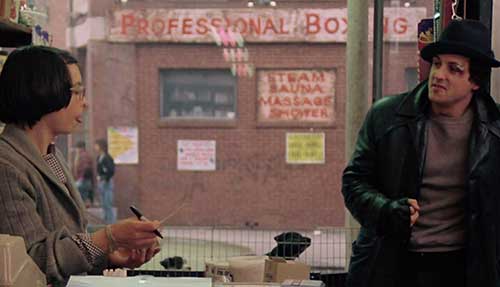 Meanwhile Rocky has been eyeing the timid pet store clerk Adrian (Talia Shire) who works where he buys his turtle food.  She’s a “spinster” (almost 30!) terrified of men largely due to her abusive oaf of a brother Paulie (Burt Young).  Their relationship blossoms in the Philadelphian squalor like a single rose growing out of a heaping pile of elephant excrement.  Incidentally, this is the same way I’d describe the outcome of the 2020 U.S. Presidential Election.

It starts with Rocky showing up for Thanksgiving dinner at Paulie’s house, a modest dump where Adrian also resides.  Thanksgiving is a minimalist affair here, consisting of roast turkey and some unidentified stuff in a saucepan.  No, there are no holiday classics such as green bean casserole, candied yams, mashed potatoes with painstakingly established gravy, stuffing, or homemade pie.  Of course we don’t know what’s in the saucepan, but odds are it’s inedible.

Paulie subsequently takes the turkey, that Adrian worked on for hours and which constitutes fully 50% of the holiday dinner and throws it unceremoniously into the alleyway after tearing off a leg for himself.  This is Thanksgiving at Paulie and Adrians.  Incidentally, this is the same treatment – and I think I speak for the majority of Americans here – that I yearn for with the sitting U.S. President come January.  Biden earned that leg.  [NOTE FOR THE HUMOR IMPAIRED: THIS IS A JOKE.]

The pair decide to go out ice skating and then back to Rocky’s filthy dump in the prestigious D.M.Z. area of Philly.  They passionately kiss and the scene fades out, but we’re pretty sure she went “all the way” on a first date pouring additional class onto an already classy Thanksgiving eve.

Meanwhile, as Creed dismisses this loser as an easy win, Rocky grabs himself a crusty new manager in Mick (Burgess Meredith) – a guy who’s treated him like stale feces the entire film – and begins an awe-inspiring training regimen that involves drinking raw eggs, abusing frozen beef and running up the stairs of the Philadelphia Art Museum.

Although plagued by self-doubt, Rocky trains hard and finally in the ring, gives Creed everything he’s got, resulting in Rocky losing the title fight with a triumphant roar from the crowd and victorious soundtrack.

The Reputation: A classic American tale of perseverance against all odds, fighting for your dreams in the face of incredible challenges, and keeping your humanity despite the indignities heaped on you by endless detractors.