The theater wasn't very full so we pretty much had the place to ourselves.  Thanks to a generous alcohol policy we brought a bottle of wine with us and were thoroughly enjoying the pino enhanced previews.  Just up until a group of 9 teens entered, each talking on cell phones and at least one with a ribald laugh that rivalled Phyllis Diller.

They sat down right in front of us. 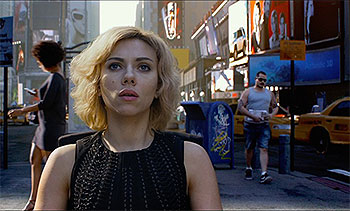 The movie opens with a bunch of lectures, damned if I could hear them.  Morgan Freeman, as usual plays the voice of reason.  He's talking about human potential and stuff, digging up that myth about people only using 10% of their brains and how much that sucks and so on.  He goes on to say something about how great it would be to use more of our brains -- like all our neurons are just sitting around twiddling their thumbs and growing soggy from disuse -- when we smash cut over to Lucy (Scarlett Johansson) who's arguing with her dufus boyfriend about something.

Couldn't make out what the problem was because Phyllis Diller in front of me was laughing at something "Johnny" said "last week Saturday" about "that bitch Vanessa," so the rest of the scene's dialogue was lost in a phlegmy guffaw.

I could tell from the video, however, that she was thrown into a bad situation by her boyfriend that she didn't choose to do and it involved some really scary Korean gangster types, clueless why.  In any case, she ends up with some on-the-spot drug surgery, in which her stomach is implanted with a bag of drugs, but I missed the scene where the thugs' HMO rep hassles her for the co-pay.

Now officially a drug mule, she's taken somewhere else where a thug kicks the crap out of her and busts the dope bag in her body.  This somehow vastly increases her brain capacity, wish I saw how, but 6 of the 9 teens in front of us decided that they needed more popcorn/Twizzlers/a hot dog/a pizza/some more candy/some dippin' dots, and stood up in unison, milled around for minutes before deciding on a course of action.

In any case Lucy transforms into a Super Murderous-Super Lucy and continues to progress down the yellow brick road to superhumanity until the movie's climax, which I, again, missed thanks to the Superfriends in front of us.

The only lingering question: if I too, thanks to a massive drug overdose, somehow started using my brain's full potential instead of dying instantly, would I too become a mass murderer?

The special effects were awesome, the plot kinda silly but imaginative, and overall worth the dough to see it provided you can ACTUALLY see it.