It's that time of year again where we gather family close, rip open a fresh carton of egg nog and huddle around the cool LED glow of our boob-tubes to watch some classic holiday entertainment.  It's the one time of the year where you know, absolutely, that good, wholesome, worthwhile sentiments will rule over crass cynicism and self-interested greed, at least until the third act.

Or do you?  Do you even KNOW what's in that egg nog?  Could those very same holiday classics hide a deeper, darker, secret message that you never realized was there all the time?  Strap on your mulled-wine goggles, take a look at these holiday classics and then decide for yourself.

Plot: A man makes a series of questionable judgement calls -- including keeping his sappy, alcoholic uncle on the payroll -- that result in him facing serious felony charges with federal bank regulators and attempting suicide.  That is, until a supernatural being alters space and time just to teach him a completely unnecessary lesson.

In the movie, George Bailey never does anything he wants to do, including working as a fisherman in Alaska and appearing in a color film.  Instead he ends up running the savings and loan his father founded, alongside his uncle Billy Bailey, a guy who makes Ashton Kutcher look like a MENSA candidate.  Thanks to Billy's stupidity and incompetence, he loses $8,000 of the bank's money, everything the S&L had to its name, which is approximately a billion dollars today adjusted for inflation.  The bank examiner wants to ask George what the hell's going on and then throw him in jail, because back then the government still bothered regulating banks. Unbeknownst to him, however, an angel has been sent from heaven in the form of a doddering old fool named Clarence (and NOT a Victoria's Secret lingerie model, thanks, god) to give George a hand and selfishly earn himself his "wings."  Unfortunately for George, his angel's not the sharpest knife in the block, and all he manages to do is spout bizarre anachronistic references, that is until George tells him he wants to commit suicide.   Clarence thinks a second and then decides to completely alter the fabric of space and time to show George what the universe would be like if he (George) had never been born.  Apparently that's a lot easier than just telling George where the $8,000 is. 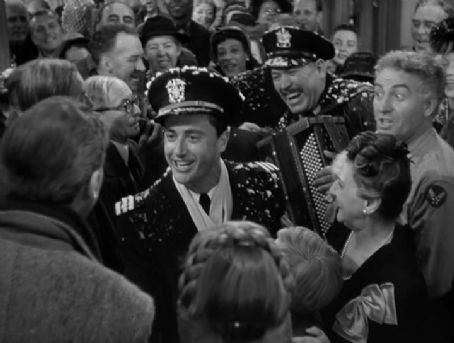 In this new universe, George never existed, and so a lot of things never happened, which somehow led evil businessman Henry Potter (Drew Barrymore's great-uncle) to take over the entire town and turn it into a cross between Las Vegas and some of the more crack-intensive areas of Detroit.  All the Norman Rockwell townspeople have turned into jerks, causing George to freak out again.

Clarence once again alters the fabric of spacetime and returns the universe to its previous state.  George is happy again, everyone strangely decides to give more of their hard-earned money to him to cover up his mismanagement of their original funds, and the financial regulators apparently forget all about the felony charges for the original (still unsolved) crime.  Ho ho ho!!

The Reputation: A feel-good tale that showcases the best, most enduring parts of the human spirit that transcend petty, material concerns, along with the surprisingly hot Donna Reed.

Hidden Terrible Lesson: Everything will work out fine for you in life, so long as the dopey supernatural creature assigned to you completely alters the universe, twice.