Plot: Criminally negligent parents recklessly endanger their child by leaving him alone at home with violent criminals while they jet off to a Christmas vacation in Paris.  Never has child endangerment been more hilarious! 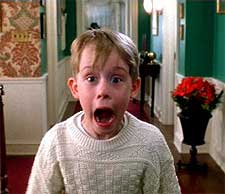 It's a premise so bad they made it three times.

It's Christmastime in the McCallister household and Pete and Kate McCallister are planning a Paris vacation with approximately every member of their extended family for an estimated cost of $10 million.  Pete and Kate have five kids, three boys and two girls, and are being joined by countless cousins, uncles and aunts, which has transformed their palatial Chicago mansion into a version of Richie Rich's personal Chuck E. Cheese.

Chaos rules as everyone frantically gets ready the next morning, loads up the cars, drives to the airport, checks in, sits in their assigned seats on the plane, orders a drink, and, for the first time in days, relaxes just a little bit.  It's only as the plane takes off that Kate realizes she's lost the ability to count to "3" and has managed to leave her youngest son Kevin (Macaulay Culkin) home alone.  Hilarity ensues. 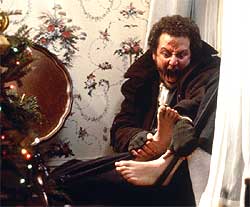 Of course, this is a great gift to Kevin, who gets to do all those things kids would do if only their parents wouldn't interfere, like eat too much ice cream and mercilessly torture the two knuckleheaded burglers who break in and stupidly refuse to leave.  Kevin plays with his prey like an experienced serial killer, inflicting Wile E. Coyote levels of damage on dopey Harry and Marv (Joe Pesci and Daniel Stern) until, thankfully for their lives, the parents finally make it back home.

Had they returned say an hour later, I'm pretty sure Kevin would've already fed the bodies into the wood chipper.

Possibly for fear of Harry and Marv pressing criminal assault charges of their own, Kevin never mentions the break-in nor his untold hours violently abusing the two masochists.  Harry and Marv also don't alert the authorities, and, more bizarrely, don't immediately sue the McCallisters for millions of dollars in damages, probably because they've got the I.Q. of granite and have never met an attorney who would salivate like one of Pavlov's dogs over the chance to reduce the wealthy McCallister family to selling pencils on the street out of a cheap tin cup.

The Reputation: A cute, feel-good comedy about child-empowerment, and a mother's enduring love for her children in the face of tremendous obstacles.

Hidden Terrible Lesson: Conspicuously committing crimes is fine so long as you're rich and the people you're exploiting are stupid.