Plot: A department store Santa Claus, who is uniquely not a chronic alcoholic ex-con, is legally declared to be Santa Claus by a cynical local judge with the help of lazy and opportunistic postal workers. 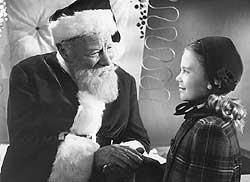 Kris is a kindly, homeless old man who lucks into a Santa Claus gig at Macy's, back when this was a big deal and not a stipulation of your parole.  The Special Events coordinator, an uptight single parent named Doris Walker got him the gig but becomes suspicious after Kris reveals himself to be perfectly sober, law-abiding, and honest about the crappy quality of merchandise for sale at Macy's.  Oh and he calls himself "Kris Kringle."

Obviously insane, Kris is sent to see the company psychologist, a guy named Sawyer who's also wound up tighter than a steel spring.  Caught up in his own personal problems, he ignores his professional responsibilities and takes his frustration out on Kris, recommending the doddering old guy be committed to an insane asylum because he (Kris) "can't concentrate."

See in the 1940s you could be institutionalized solely on the flimsiest whim of anyone in any position of authority.

However, the store's owner Mr. Macy has since turned Kris' honesty into one of the most cynical business models since "The Pet Rock," and began exploiting the good will of his customers to drive up his own profits.  It turns out when Kris recommended people go to other stores to buy stuff because Macy's sold low-quality garbage, customers appreciated the honesty and bought more (presumably other) stuff from Macy's out of some misplaced sense of loyalty.  So the owner decides to exploit this good-will immediately and demands Kris remain out of the funny farm, at least while it's profitable. 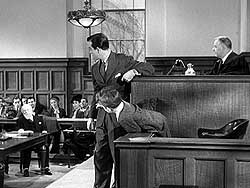 To minimize Kris' exposure to the public -- and thus reduce the potential for this loony to become violent -- he goes to live with divorcee Doris and her daughter Susan (Natalie Wood).  Here he meets John Gailey, an attorney trying to get into Doris' pants by manipulating her child to like him, something he openly admits and everyone finds charming.  Despite that, he's on Kris' side, buying the old man's story hook, line and sinker because there are "intangible things" in the universe.  Presumably he's talking about dark matter or something, although why he finds that relevant to a senile old man's megalomaniacal delusions is beyond me.

Stuff happens and eventually Kris is put on trial to once and for all determine if he really is Santa Claus, because nothing gets at the absolute truth like a good old fashioned jury trial, just ask O.J. Simpson or Casey Anthony.  Anyway, Gailey steps up to defend him, albeit incompetently.  Things are going terribly for Kris until an opportunistic postal worker figures out a devious way to get rid of all the "Santa Claus" mail that's been piling up for years: dump it on Kris and make it his problem.  The scheme lets the USPS clear up a ton of office space, and generously allows Kris to pop a hernia while spending all his Santa salary incinerating the letters.  When you've got a problem, outsource it!

Timing is everything, because right around now the judge on this case realizes he's up for re-election soon, possibly because his Blackberry calendar wasn't working properly until just now, and figures he can secure victory by going along with the USPS' hair-brained scheme.  He rules that Kris legally is "Santa Claus" and everyone's happy... despite the fact that he's just set a more ridiculous legal precedent than Bush v. Gore.

The Reputation: The quintessential holiday classic that teaches that even the most "realistic" among us can learn to see value in the ineffable, yet intensely meaningful qualities of human experience.

Hidden Terrible Lesson: Stick to your delusions long enough and someone will bail you out for their own selfish reasons.