Plot: Miserable T.V. exec Frank Cross is looking to "own" Christmas with his tacky live-action rendition of Charles Dicken's "A Christmas Carol."  Predictably, he is then visited by three ghosts, who pour rich and creamy life lessons all over his naked, exposed soul. 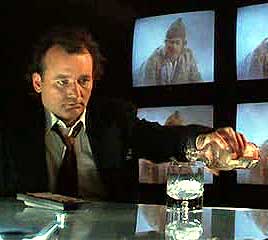 It's Christmas Eve, and uptight jerk Frank Cross (Ghostbuster Bill Murray) runs a major television network which is solely dedicated to producing a boffo Christmas special based on a 160 year old story that everyone's done -- in every media form -- a billion times before.  But this time he has Mary Lou Retton playing Tiny Tim and John Houseman doing narration, so you can tell it's destined to top the Nielsens.

Top the Nielsens in Lightfoot, Arizona, that is.

Unfortunately Frank's ideas for promoting this career-making extravaganza are horrible, which is only pointed out by Eliot Loudermilk (Bobcat Goldthwait), the sole corporate sycophant at the table stupid enough to say something honest.  He is fired in record time by Frank, who watches through a telescope from his luxurious top-floor office while Bobcat is forcibly thrown into the street, in much the same manner I imagine Barack Obama wanted to do with George W. Bush after being sworn in.

Anyway, later on Frank is visited by the zombie of an old boss and golfing partner, who tells him he's wasting his life being a cynical T.V. executive and should instead do good things.  Frank drinks a lot of booze and agrees.  The zombie leaves and Frank blames the whole experience on Chernobyl-tainted vodka.

As it turns out, Chernobyl-tainted vodka really just gives you throat tumors the size of cantaloupes and not hallucinations about undead bosses. 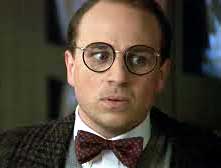 Nevertheless, later on Frank realizes the zombie was right when Buster Poindexter -- to be fair, a zombie in his own right -- takes him on a wild cab ride into his past.  In the flashback, Frank learns he never really did get the plot of "A Christmas Carol," and is therefore surprised to learn he chose a high-powered career and wealth over middle-class medocrity and hurt people, namely his girlfriend Karen Allen.  Allen here furthers her acting career playing girlfriends by playing Frank's crunchy-granola-hipster girlfriend, who I'm sure at this very moment is "occupying" someplace in America, possibly a methodone clinic but I'm just guessing.

In any case, this flashback is followed by visits from two more ghosts, who, of course, stuff him like a Butterball turkey with all kinds of life lessons until he is dumped back home a changed man.

About this time, Loudermilk (Goldthwait) shows up with a shotgun to murder Frank for ruining his life.  He misses, Frank reveals himself to be injected with all kinds of good cheer and holiday spirit now (it might be Demerol), everyone forgives him, and they sing a happy tune throughout the credit crawl.  And God bless us, everyone!

The Reputation: A funny, modern twist on a sentimental holiday classic with yucks and zombies for the whole family.