Plot: An estranged daughter desperately attempts to host Thanksgiving in her modest Lower East Side hovel for her vicious dying mother and dysfunctional family. 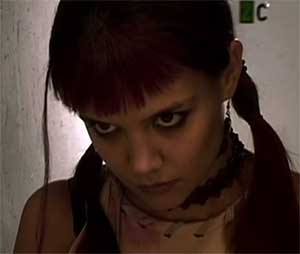 April Burns (Katie Holmes) lives with her boyfriend in a cozy Lower East Side dump and is on pins and needles.  She’s agreed to make Thanksgiving dinner for her estranged family and has invited them to her place for the first time.  Her mother Joy – a treacherous and vicious woman wonderfully played by Patricia Clarkson – is dying of breast cancer, so this may be her last Thanksgiving.

Still April’s prepared: she’s got a frozen turkey, some boxes of stuffing and other crap.  Neither she nor her boyfriend know what they’re doing, but they think they remember that you’re supposed to jam stuffing and an onion in the bird and do so, after picking the turkey up off the floor where they dropped it. 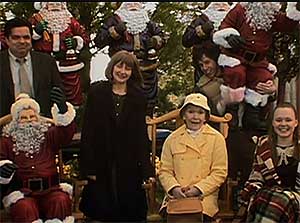 Meanwhile the family is winding its way to NYC.  The photography obsessed brother (John Gallagher Jr.), who doubles as mom’s pot dispensary, keeps things awkward by snapping candidly embarrassing photos throughout this interminable drive.  Dad (Oliver Platt) slaps a smiley face on it all and tries to keep the peace, realizing this may be his dying wife’s final road trip.

Back in the city, April’s supportive boyfriend has sex with her then ditches to get a suit, leaving her with the cooking.  She pulls out all the things she’s been storing in the unused oven and click… click… click.  Nothing.  Turns out the oven’s broken. 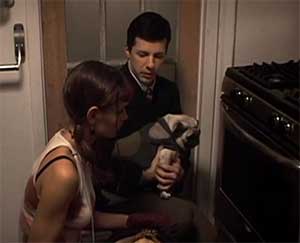 A tough enough problem in an apartment building with a competent maintenance staff, but insurmountable in this dump.  So she’s off to meet the neighbors in the increasingly desperate hope that one of them with a functioning oven will cut her a break and stop being a jerk.

She finds some helpful folks in this building full of eccentrics, including Eugene and Evette (Isiah Whitlock Jr. and Lillias White) in 2B who let her use their oven before they cook their own bird.  But she’s only got a couple of hours, so she needs to find another oven to use.  The “foodie” husband hassles her about her lack of cooking experience and she’s off to open a can of cranberry sauce and make “mashed potatoes,” which she savagely attempts to mash raw.

Meanwhile the family continues their trek to NYC and hits a squirrel on a back road.  They bury it in a simple, silly ceremony.

Meanwhile boyfriend Bobby continues his search for a suit.  Instead of going to a clothing store he enlists the help of a buddy who has a great deal for him but jerks him around for hours.  Eventually his buddy takes him to a local thrift shop and he finally picks out a suit.

Bizarre dog enthusiast Wayne in 5D (Sean Hayes) is up next with a new stove.  He agrees to let her cook her turkey here before locking April out of his apartment for being mean to him.

Back on the road, mom (Clarkson) gets high on weed and seat dances.  Then she shares some photos of her missing breasts with grandma before throwing up in a gas station bathroom. 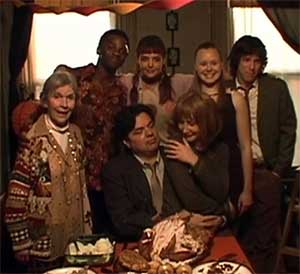 Back home, Wayne finally allows her to retrieve her still undercooked turkey after ripping off a leg for his dog as “compensation.”  She finally ends up in apartment of some Chinese immigrants who let her use their stove to finish the bird.

The family finally arrives at April’s apartment and promptly drives off to find a restaurant.  Mom and son have a change of heart and head back to April’s place, abandoning husband, daughter and grandma.

The Reputation: A touching, playful holiday adventure featuring endearing performances and moments of human insight set against the familiar backdrop of a Thanksgiving feast.

Hidden Terrible Lesson: At least seventy-five percent of people will let you down when you need them the most.