WASHINGTON - Early this morning President Trump tweeted what he claimed was the "evidence" that the C.I.A. presented him showing his administration's ties to Russian intelligence operatives, in the form of two hastily doctored photographs with the President's name clearly visible in the image properties. 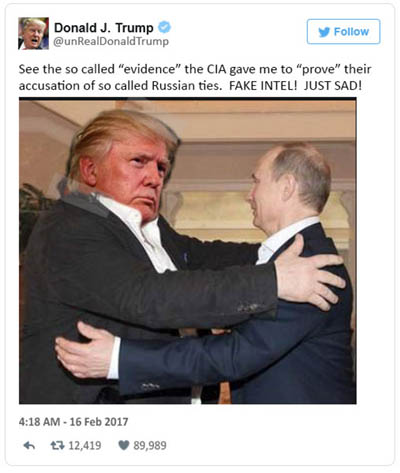 "Did you see my tweet," the President said later, cutting off the Prime Minister of Israel in mid-sentence during his unscheduled afternoon soliloquy.  "Did you see it?  That's the evidence they have, the CIA, that's what they have, and it's pathetic, pathetic.  Like Arnold Schwarzenegger, just sad, sad.  Nobody can fill my shoes.  They've clearly made it up."  The President then discussed his old T.V. show again, and how "dishonest" new coverage of him is, before segueing into a diatribe against "Vanity Fair," "terrible Russian vodka.. in Moscow of all places," a meditation on Ivanka's shoes for some reason, a meeting he had at "NASA someplace" that was "great," how "peace could be achieved" in the middle-east thanks to him "if only they'll listen to the best deal they'll ever get," and finally, we think, something to do with what either his wife or Kellyanne Conway wore yesterday, we're not sure.  Then the President just sort of wandered off the stage.

Taking a second to repressurize the press corps water cannon, White House Press Secretary Sean Spicer was quick to defend the President's tweet and his later comments.  "It's obvious to anyone who looks at those pictures that the evidence here was very, very slim," Spicer said, holding up very small pictures of the photos from twitter.  "I think it's obvious that the intelligence agencies have it out for President Trump."

He clearly just taped his face over someone else's and then said it was from the CIA to make their evidence seem shaky, said New York Times reporter Judy Judith.

"His name is in the image properties as the author," noted Washington Post reporter Stu Studly.

"He clearly just taped his face over someone else's and then said it was from the CIA to make their evidence seem shaky," added New York Times' Judy Judith.

At this point, Spicer reengaged the water cannon, sweeping the assembled press and cameramen off their feet and into a large, wet, swirling mess headed at high-speed to the back conference room wall.

Interrupted at the execution of thirteen political dissidents, Russian President Vladimir Putin wiped away tears of laughter before cursing at reporters looking for a reaction.  As of filing, none of the reporters could be located.