PUNXSUTAWNEY – Mere weeks after predicting that "Russia would directly interfere in the 2020 presidential elections to re-elect Donald Trump," the world's most famous marmot prognosticator Punxsutawney Phil was unceremoniously fired by President Trump via tweet, calling the rodent a "rat."

The prediction was an unusual break in Phil's prognostications, which, since 1886, have usually been about how many more weeks of winter there would be. This year, however, Phil ventured directly into presidential politics and Russian election interference.

"Even without my enormous predictive powers, it is obvious that Russia will, once again, interfere in the upcoming election in favor of your president," Phil said on February 2nd, through ceremonial handler Russ Rustin.  "It's incredibly obvious."

Then today, without apparent provocation or other mention, President Trump "fired" Punxsutawney Phil, despite having no authority to do so, as Phil is not a federal employee or indeed human.

"There is obviously no reason to fire Phil over something that every national security insider already knows to be true," said Irv, over an inexpensive coffee at Dunkin' Donuts.  "That, plus it's silly.  I mean he must know that the marmot can't really talk, right?" 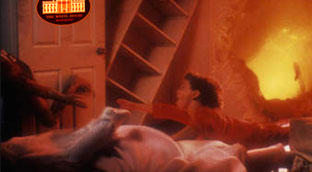 The White House did not immediately return our call requesting comment, but then again it's never returned our calls ever.  White House Junior Press Secretary Amy Adams, however, did tweet this picture showing her difficulty in entering the press room this morning for the "daily chaos" update for the Washington Press Corp.

Russian Deputy Ambassador in Charge of Denying Collusion Allegations Dimitry Orinkofsky denied Phil's prediction.  "We deny that there is, or ever was any organized effort by the Russian state to actively interfere in the elections of the United States, the Ukraine, Estonia, or any of the other nations we are accused to have manipulated.  The fact that we directly benefited from whoever was ultimately elected has nothing at all to do with any active propaganda campaign by Russian intelligence," Orinkofsky said.  IRREVERENT has since learned that Mr. Orinkofsky was subsequently reassigned to "Siberia" as a "reward for months of service to the Russian State."

Wall Street, fatigued with Trump Chaos for the day, took a sip of scotch and laughed.