A woman and her daughter are forced to move into a really crummy dump and before you know it weird things start happening, most of them involving water.  Lots of water.  And more really rusty, crummy, dark and danky water.  There's water, water everywhere, and, presumably, even a ghost for no clear reason.  But you won't see that until just before the credits are ready to scroll.  Meanwhile, you get to watch mom (Jennifer Connelly) fritter away her days doing household chores, talking with her divorce lawyer (Tim Roth), and taking care of daughter Ceci (Ariel Gade) who goes to a really cool elementary school nearby.

Feel those chills down your spine?  Did I mention there's lots of water? 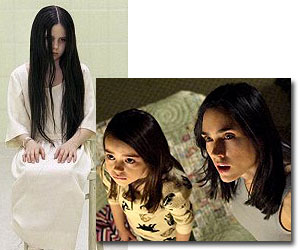 Here's mom: a separated wife who has no job, not a lot of money, and is therefore on a determined quest to find the crappiest, most child-endangering apartment building in New York City.  This isn't a problem for "Mr. Murray" (John C. Reilly), who -- in a wonderfully squalid performance -- manages to give sleazy slum lords an even sleazier name.  He's got just what she wants, and as he shows her around their hovel to be -- noting everything that'll be "fixed just like new" when she moves in while working her daughter for sales support -- he manages to display more cheap sales tricks and carny behavior than an Amway Convention at Coney Island.  (Hats off to Mr. Reilly.)  After discovering the nearby school is "one of the best in New York," the deal is sealed only moments before Mr. Murray gets his hooks into another pair of suckers intent on ruining their lives by moving in.

Also inhabiting this flophouse is exceptionally creepy superintendent "Veeck" (perfectly played by Pete Postlethwaite): a vaguely ethnic weirdo who obsesses about teenage punks, watches people (really creepily) ride the elevator, and mops up water which guarantees him overtime in this dump.

Just as they begin settling into the grime, along comes invisible friend Natasha (Perla Haney-Jardine) for daughter Ceci, who "makes her do things" like scribble on paper and take elevator trips monitored by Veeck the Creep.  Yet despite the fact that the entire viewing audience -- as well as those not viewing -- know that Natasha is a ghost, this is (of course) ignored by everyone, but that's okay because you won't see really anything else about a ghost until just before the end of the movie anyway.

[amazon product=B000AWYOGE pos=left][/amazon]How are we going to kill the hour in between you may ask?  Easy.  Lo and behold, mom's crappy apartment springs a water leak that causes major ceiling damage.  Let's call the creepy super!  Oh, now let's call Mr. Murray.  Okay, well the creepy super isn't going to fix the leak.  Well, let's call the divorce lawyer and discuss her failed marriage and court strategy.  Okay, back to the roof again, it's getting really bad and dripping goo all over the floor.  Well, they're going to fix it now, finally.  Hmm, a crappy repair job, but it's fixed at least.  Ho hum, let's do some laundry!  Oooh, those are some creepy punk kids, all right, I can see why the creepy super hates them.  Hmm, I wonder what's on T.V. tonight?  Whoops, that darn leak is back!  And so on.  I guess you gotta admire a film so obsessed with water pipes, drywall damage, and building maintenance that it could easily have be bankrolled by the United Assocation of Plumbing.

I may have forgotten a few more ceiling repairs or water damage, and there's also a really creepy abandoned apartment just above mom's, but that's more or less it.  And then, at the end of the film, everything gets resolved in a 10 minute whirlwind of action, just in time for you to be really, majorly depressed.  Yes, depressed.  Way depressed.  The end is heart-wrenching, sad, and depressing.  Not scary, mind you, just "whoa wasn't expecting that what's that about" depressing.  Yeah, see that's sorta my problem with Dark Water.

This is not to say Dark Water is a terrible movie not worth your time: it is, just don't see, watch, or listen to any of the promotional materials or movie trailers beforehand. It's not The Ring.  Once again, the disconnect between a studio's sales division and the actual film couldn't be more apparent.  You can almost imagine the conversation in the Disney marketing department: "It's a suspense movie and the original was Japanese, therefore it must be The Ring!"  "Crank up the printing press, this sucker's gonna bleed money!"  "Yeah, okay, so let's stick a spooky girl on the cover and call it a day."  "Ok tell them to make Connelly's hair long and black, just like that other girl."  "Now there's already a spooky kid too, right?  Perfect, who wants caviar?"

So, adjust your expectations and dive in: the water's really creepy, just don't wait for it to be the "horror movie" that's promised.

Okay, now I get it.  I've just finished watching the original Japanese version of Dark Water (2002), and now all the items that didn't make sense in the American retread suddenly become focused.  There was one clear difference between the two (go out and buy, see, rent or otherwise watch the Japanese version and learn Japanese or just deal with the subtitles) is the American version's fixation on water.  I mean, the water is an element in the original film, but Walter Salles went absolutely bonkers with it in his 2005 interpretation.

Also absent in the original are the two punk kids (which are in Salles version apparently just for atmosphere), and the totally creepy superintendent.  There's a super, and he's creepy, just nowhere near as creepy as Veeck.

Also in the original, most importantly, is the element of horror.  Watch it, you won't regret it in the morning.