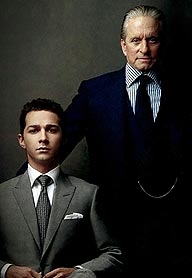 Twenty-three years after the original, Gordon Gekko returns, fresh from prison with a new book to promote all about greed. Divorced and estranged from his only remaining child Winnie (as in "the Pooh"), this new grandfatherly Gordo hands out life-lessons and schemes to get back all his hard-stolen dough from his daughter, who doesn't want it anyway. So... umm, well he doesn't have to scheme very hard really.

Anyway, things have changed in the twenty years since Gordo was king. Speculation fever has gripped Wall Street, we're told and led to the ruin of our entire financial system. Instead of good-old-fashioned insider trading, these days odd guys like Bretton James (Josh Brolin) make billions by doing questionable things. Some sort of questionable things having to do with, umm, bad debt? Sub-prime mortgage bundling? Oil speculation? Illegal DVD sales?

Ok, I'm not exactly sure what Bretton James does in the movie, but he's a bad guy. I'm pretty sure of that anyway. Even though he does give Jake Moore (Shia LaBeouf) a great job after he loses his last one, and takes him out speed racing on awesome motorcycles. Yes, he does give Jake the motorcycle afterward too, but he's a bad guy doing questionable things. Of that I'm, like, 40% certain.

Oh yeah, Jake Moore (Shia LaBeouf). Jake's a Wall Street trader working in alternative energy markets. He likes a guy called Dr. Masters (Austin Pendleton, a great character actor you'll immediately recognize but have no idea where you've seen him before), an entrepreneurial scientist trying to make a fusion power plant that'll change the world, and loves his girlfriend Winnie Gekko (Carey Mulligan).  Yes, she's Gordo's daughter who hates her father and hasn't spoken to him in years.  Jake gets a big, fat bonus check ($1.4 million) as the movie opens, which he uses to buy his girlfriend an engagement ring that would choke Princess Diana, and speculate on how great his firm will do by buying lots of its stock on margin.

If you don't understand broker-speak, it doesn't matter: he loses it anyway. Turns out his firm, "Keller Zabel" is in deep poo-poo thanks to the silliness of crusty old managing partner Louis Zabel (Frank Langella), Jake's mentor.  See Louie's gotten involved in all kinds of bad debt... or sub-prime mortgage bundling?... stamp collecting?... or losing on Jeopardy?

Anyway, Louie's done something stupid and 15,000 people who apparently work for him are about to be canned because of it. So he steps in front of a subway train and kills himself.

We know this because we saw it on cable news shows. You spend a lot of time watching T.V. during "Money Never Sleeps." You see all sorts of talking heads and even that crazy guy Jim Cramer makes a cameo. Yup a lot has changed in 20 years. Back in the eighties the cable news channels covered the greatest bull market in a generation. These days, they cover the worst bear market and recession (don't use the D word!) since the late 1920s. And despite all that coverage, nobody knows what the hell's really going on.

If you're looking for some artistic insight into the current crisis, well you'll need to look someplace other than "Money Never Sleeps." In the end, MNS is a drive-by look at the current financial catastrophes, with good ol' Gordo providing narration for the cheap seats, set alongside a bizarre family reconciliation sub-plot (between Winnie and Gordo) that just sort-of pops up every now and then. Meanwhile, Jake is off trying to fund a fusion power plant for some reason, Winnie runs a left-wing website, and Gordo ends up getting back all his money -- despite literally NO obstacles for him to overcome at all -- and starts again pretty much where he left off, only this time in London, where they have great tailors. Then, by the end, Gordo (bizarrely) switches character and reconciles with Winnie, who by this time is knocked-up with Jake's son. The end.

There were a few nice, some weird, and some strange touches worth mentioning. Let's do the weird first. Back from the original is Bud Fox (Charlie Sheen), looking a lot older and serving no actual purpose except to be present and announce that, in the end, Blue Star airline -- where his dad used to work -- ended up making him millions. Also back from the past is the annoying real estate lady, who sells Jake's loft. And finally, reprising his former cameo role is Oliver Stone himself, who plays someone in an art gallery and on a phone someplace, presumably a bunker or an office building or a cottage in Montana.

In the nice column, we've got Susan Sarandon playing Jake's mom, who does a good job as a nurse turned real-estate broker. Again, she made me understand why she's Susan Sarandon and not Heather Locklear.  Michael Douglas, reprising his iconic role, does do a fine job with the material he's been given, and it was great to see him recapture some of the energy from his original performance. Finally, Frank Langella, despite the odd way his character is thrown around this flick, does a great job as the elder mentor and believable "old timer" on the Street.

In the strange bucket, I must add Eli Wallach as Jules Steinhardt, playing an old banker who is somehow involved in the questionable investments that ended up ruining the country. Eli Wallach has had an amazing career, and I still watch "The Good, The Bad, and The Ugly" almost ritually. Seriously, man, it's time to hang up the spurs and let a few stunning Playmates give you daily full-body massages and blow a few million frivolously. You've earned it, you're a legend, we love you, and everyone understands.

So what can we take away from WS:MNS?

2) Gordon Gekko, the once powerful king of the shady deal in the late eighties, is now a veritable Wall Street Yoda, captioning the current crises for the viewers from 30,000 feet, while dishing out plot points and life lessons to some guy he just met.

3) James Brolin's character is a bad guy; why, we don't exactly know.

4) Frank Langella's character is a good guy, but we're not sure why that is either, since he pretty much nuked his firm making boneheaded decisions.

5) We still don't know what the hell caused this financial crises, but it has something to do with debt, or sub-prime mortgages, or 401ks, or corn future options, or steak tartare for all I know, hell I'm even more confused!

6) "Wall Street" was a powerful movie about the price of ambition against a backdrop of rampant corporate greed that still resonates with audiences today. "Wall Street: Money Never Sleeps" was about other stuff.