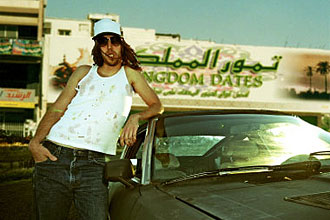 I call for an immediate attack on Saudi Arabia to take over their oil and to install an American-backed regime in Riyadh friendlier to the United States. It's been eight whole years, and we haven't  attacked a third country yet. We only attack countries weaker and smaller than ourselves. It was Saudi Arabia remember that supplied the hijackers that carried out 9-11.

Why do we love Saudi Arabia? We hate Moslems. Because of 9-11, we hate all Muslims, even those poor slobs in Indonesia, right?

We could make Saudi Arabia first an exploited colony garrisoned by American troops and ruled by an American viceroy who looks like John Wayne. He could saunter around with a pair of pistols and say to all the turban-heads, get out of my way, Pilgrim!

Eventually, we would annex Saudi Arabia and make it the 51st state in the union.

We would call it, Saudi America.

We could build the very first adult-and-selected-minors-only X-rated Disney theme park and call it Stud Mickey on the Dunes (as in Mickey Mouse with a huge phallus riding a dune buggy across the Saudi sands). The center piece of the park would be the largest reality roller coaster in the world, specifically built to eject randomly chosen senselessly singled out certain unsuspecting riders engaged in the act of intercourse at high speed headfirst into a tiled lagoon, the possibility of potential un-rehearsed home movie-style entertainment to be televised for the cruel enjoyment of ignorant and easily impressed visitors, and those who enjoy listening to Sarah Palin.

This could all be funded by raising the price of gasoline.

Think what we could do with that oil money. We could turn Mecca into a glittering casino city to rival Las Vegas or even Branson Missouri with Arabic symbols on the slot machines to help fleece native sucker common-as-dirt potential slaves and hook them hopelessly on gambling, diverting them from their current occupations, sheep herding and wife beating.

A new industry, the sales of genetically-engineered gnats, would be developed, as hotter global warming sand dunes are prefect breeding grounds for the pesky insects. A rapidly multiplying growth bio-organic type of farming, gnats would be exported from Saudi America all over the world as a way to, after introducing them into the mouth, cleaning (by the insects eating away) decaying food between the teeth, eliminating the need for floss. A black market illegal trade could also be set up to infest the homes and cars of ex-wives and disagreeable bosses, the product to be titled, "Revenge with a Buzz." We could hire Glenn Beck as a spokesman.

A special tax will be set up levied on the families of American serial killers back home based on household income to fund the first non-interrupted, elevated freeway running from the coast of Florida to the new state of Saudi America. This will allow the free movement between continents of hordes of Social Security grabbing, leech-like-freebie-sucking salary-less elderly retired loafers, who think the world owes them for the simple act of living, a bunch of non-contributing, seasonal immigrant vagabonds who will flock to a newly-constructed upscale gated condominium development along the Red Sea to be titled, Moses Slept Here, Phase One.

The Saudi royal family will be moved out and given property in the fashionable Hamptons of New York State, and posh flats in London, the only things they ever really wanted in the first place. They can thus be rich and drive Rolls Royces and pretend they are successful Englishmen wearing robes.

Solar powered computerized micro chip mechanical camels will be created to run on the world's first water-gravity-flow-fed pneumatic tube monorail system, the water to be shipped by means of a specially constructed overhead pipeline from the Central Valley of California as that state totally falls apart and no longer needs it. Governor Arnold will attempt to avoid presiding over the California debacle and will seek office in Saudi America, but will be stripped of steroids and escorted to the border where he will be told to go visit long-neglected relatives in Austria who highly doubt his even minimal acting ability.

Arnold will find it hard not to put on one of the cottage industry teabag reproduction German helmets.