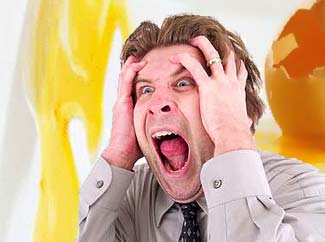 "What the fuck?" my boyfriend shouts. "Fuck you!" His fist comes down hard on a carton of eggs. Yellow yolk and flints of shell splatter the kitchen, barely missing my dress. I feel sliminess ooze between my sandaled toes and wonder if egg yolk ruins pedicures.

He throws the egg carton onto the floor. Although my toes are now fully slimed, I barely flinch. After all, he is not angry with me, he is angry at the egg. Perhaps it did not crack right. Maybe there is a stray shell in the bowl, or maybe the whole batch is rancid. It does not matter; I’ve grown accustomed to his habit of cursing at inanimate objects. I find it oddly adorable, and so I egg him on…

He holds up a warning finger - code for "the egg has me even more pissed off than normal." I grab some paper towels and start to clean up the mess. I watch through my peripherals as he runs his bloody hand underneath cold water. My mind starts churning, but rather than thinking what I should be thinking, "my boyfriend has an anger management problem. Perhaps he should go to therapy?" I am thinking about how good it feels to curse. The F word, the S word, the F and S word together, there is such relief in those simple phrases. I look at him, inspired. "Do you feel better?" I ask. "Yes," he mumbles.

I am not perturbed by his lack of interest, but set out to discover the inner workings of these nasty little words.

We swear when we burn a grill cheese sandwich on one side, we swear when we stub our toe in the middle of the night trying to get to the bathroom for a pee, and we swear when we are on the toilet and there is no toilet paper left. "Damn!" We swear in the privacy of our homes, when there is no one else around to appreciate our eloquent profanity.

[inset pos=right]There are taboos we dare not touch, but the taboo of the curse word is inviting, accessible, and cathartic.[/inset]We swear in public too. We swear when we just miss the post office closing on April 15th, our income tax papers waving at the post office clerk who locks the doors without sympathy. We don’t just swear, we swear at her. "Asshole!" We swear when we are at a party and telling a dirty joke. In fact swear words are the most popular adjectives and adverbs used in everyday conversation. They add emphasis as legitimately as a "very" or an "extremely" would do. We swear when we are at the grocery store with a full cart of frozen food and realize we’ve forgotten our wallet. "Fuck me! " We’re back to swearing at ourselves. So what’s our motivation?

Obviously, we curse when we are frustrated, angry, or in pain. We swear to vent and blow off steam in a way that could otherwise be harmful and violent. Why this particular outlet for rage? I believe a lot we can blame on our good ole Western ways. We are taught early on that it is not okay to cry. "Don’t be such a baby," we hear. "Big boys and girls don’t cry," our mothers and fathers tell us. Crying is no longer an acceptable form of expression, and so we latch on to curse words as a healthful alternative.

Case study #1: Me. I started to observe my swearing habits, and found that I am not one to randomly swear. Like most people, I swear when things don’t go the way I want. My hands curl into a fist and an emphatic "Fuck!" is accompanied by an aggressive foot stomp. Even when I am sitting down: hands curl, feet stomp - just like a child before the tears start to fall. But I would rather succumb to a few more "fucks" and "damns" than let the dam of tears break. I am a good ole fashioned American temper tantrum swearer.

But that is not the only species of curser America has bred. Consider the I.P.O.V (integral part of the vocabulary) swearer. America is the land of the free, the land of the brave, and the land of the fast. We drive fast, have sex fast, and talk fast. We talk faster than we think, and the brain needs a chance to catch up, so it fills in the gaps with some "ums" and some "urs." One is then labeled inarticulate, slow, dare I say boring? Much better to fill in the gaps with a fuck, shit, or damn! Then you are simply expressive, passionate, and in certain gender and age groups, cool.

Case study #2. My friend’s ex-boyfriend. We’ll call him Alex because that’s his actual name. I was forewarned: "He swears a lot," my friend explained. "No problem, I enjoy trash talk," I assured her. "No, I mean A LOT. Like every other word is fuck." She wasn’t kidding. "How the fuck are you? Fuck man! Can you believe this fucking weather? Fuck! The other day the fucking rain was pouring the fuck down and then the fucking last coupla days the fucking sun. It’s so fucking hot. My fucking titties are sweating. Do you fuckin’ know what the fuck I mean?" I turned to my girlfriend so she could translate; my head was spinning and I think he spit on me. "He thinks it’s really hot out," my friend clarified. Sure, we could get psychoanalytical and say that he is hiding his insecurities and fears behind the curse words - the fucks make him feel in control and powerful, somehow more masculine and charming. But I don’t buy it. I think it’s the speed of America that’s got him going. He’s gotta keep up, gotta think fast, gotta impress, and his brain’s gotta make up the difference. And how does it do that? With a few, or several "fucks."