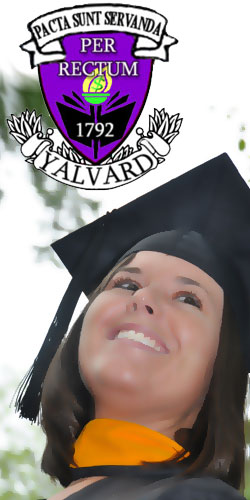 Assembled graduates, friends, regents, wealthy donors, far poorer parents, hangers-on, dilettantes, dim-wits, and of course Chancellor Faraday, it is my highly compensated pleasure to welcome you to today's graduation ceremony for the Class of 2015.  It has been three years since I've had the pleasure of addressing the student body here at Yalvard.

Many things rush to your mind when asked to give a commencement address. "How large is my fee?" for example.  Will I sound like Steve Jobs or Bob Dylan?  How do I adequately express my resentment of over-privileged youth while still jamming some hard won life lessons down the gullet of a grotesquely debauched and hung-over crowd?

The answer is you can't.  Like Bob De Niro recently reminded another groups of graduates, "You're fucked."

As to the other answers, well let's just say my fee has already financed a debauched week of my own in the south of France and had enough left over to settle the mortgage on my villa in St. Lucia.  But I digress.  Let's return to you.

You were born in or about 1993, a year that brought us "Sleepless in Seattle," caused Haddaway to ponder "What is love?" and saw the debut of one of history's greatest television shows "The X-Files."  You were just babies, but I had recently graduated from college myself, which is merely one of the deeply depressing realizations I had while penning this masterpiece.

[inset side="left" title=""]You entered the cult of lowered expectations at a fortuitous time.[/inset]The show starred David Duchovny, well before his oversexed role in "Californication," and Gillian Anderson, whose emotional range spanned the gambit from Kristen Stewart to Taylor Lautner.  The duo sought alien beings and investigated all the oddball crap the normal FBI didn't want to deal with and it was great.

In a way, your last four years have been a lot like that show.  Drug addled experiences, sexual tension, bizarre monsters and aliens leaping out at you from every corner.  Yes, Professor Harlan, I do mean you!

But also, your time here was very much a journey into the unknown.  A journey that led you to the outer boundaries of knowledge, guided by some of best minds of your generation.  A journey also to finally hook up that ménage à trois you always dreamed about.  Sadly, that too remains unknown.

However, no journey is complete without challenges along the way to force some personal growth.  Luckily, you entered high school right around the time in America when mortgage bankers decided to hand out $500,000 loans to folks with 1% down and then tell all their buddies about the easy money they were making.  You entered the cult of lowered expectations at a fortuitous time.

See you are, and I apologize in advance, the George W. Bush generation.  Through no fault of your own, you came to your political awakening after the tragedy of 9-11 and before Barack Obama's "hope" really took hold.  This only leaves those eight long years at Bush's Crawford Ranch.

Speaking with many of you, particularly the semi-dressed hostesses at Delta Gamma Gamma's toga party last night, the fact that you are a George W. Bush generation is pretty easy to spot: you think politics is bullshit, the 1% are a-okay, government can't be trusted, and prefer any job that allows you to spend more time on vacation than actually at work.  Hell, who can blame you.

You also seem to be a pretty religious group with a surprisingly casual sexual attitude, which is as fun as it is contradictory.  But at least it's a fun contradiction to have.

All in all, you are a remarkably flexible generation, limber in both mind and body, as the sorority sisters at Delta Gamma Gamma so kindly demonstrated last night and all through the morning.  I know you will truly go far.

And with those kind words, I would like to present to you, Chancellor Faraday and the rest of you still sobering up, the Class of 2015: Never give up on your dreams, never stop reaching for the stars, and the unemployment line is right around the corner.  ENJOY BEING FUCKED, PEACE!