President Trump Gives Speech About His Old T.V. Show, Prayer, Hopefully Being Reelected, Rex Tillerson, Arnold Schwarzenegger, How Smart He Is, Chief Ryan Owens' Heroism, Great American Families, How Miserable The Rich Are And/Or Possibly Something Else

WASHINGTON – Today President Trump talked at the annual National Prayer Breakfast, although as hard as we tried to follow what he was saying, we have no idea what the speech was actually about. 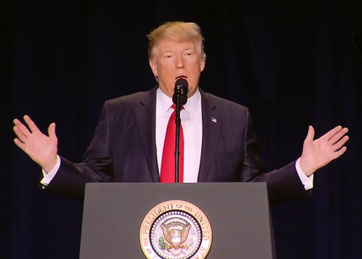 “Thank you very much,” President Trump said, and then launched into a stream-of-consciousness talk on President Eisenhower, Rex Tillerson’s swearing in, his old T.V. show “The Apprentice,” and how he fired Mark Burnett apparently.  In there somewhere he publically speculated on who actually appoints the Chaplain he just heard speak – Did he do it and forget?  Was it the Senate? – then, despite not knowing who appointed him, says “the hell with it” and "guarantees" him a “secure job,” for some reason and with some unknown authority to do so.

Then he went on to praise Vice-President Pence, and particularly point out why he (Trump) was so smart to have picked him for V.P., then he “thanked” the American people for their “faith and prayers,” stressed his appreciation for the U.S. military, the heroism of Chief Owens, how “miserable” really rich people are, how if you’re poor you better have “great families” and “faith” since “they don’t have money.... and they're happy.”  Whew.

At this point, we had to break open the smelling salts. He then said how “blessed” he was to “be raised in a churched home,” how “freedom of religion is a sacred right,” then that “the world is under serious, serious threat in so many different ways,” whatever those ways or threats are, but it’s all gonna be ok because “I fix things,” the President said, trying to reassure the few remaining folks who were trying to keep up.

But then he noted “we have seen unimaginable violence carried out in the name of religion” (my head really started hurting at this point), that terrorism “must be stopped,” then he apparently realized he kinda lost his new Secretary of Defense as he was “going to some other spots” that he couldn’t recollect,  then said how he will keep bad guys from entering the United States, then again how great God is, and then “God bless you and God bless America.”  There very well may have been a recitation of an old grocery list, a spoken-word cover of an Adele song, or itemized hotel receipt in there too somewhere, we just don't know.  By that point the audience was too numb to notice anyway.

Then, we’re pretty sure?  He stopped talking.  We are still foggy on the entire experience.