UNITED STATES - Today an almost overwhelming sense of dread overcame the nation as it collectively realized there are less than two short months until the U.S. Presidential Election and it really looks like we're going to do this.  We can't avoid facing it any longer: one of these guys is really going become the President and be in charge of the most awesome military force in the history of mankind.  We asked leading scientists and thinkers how on earth we let this happen. 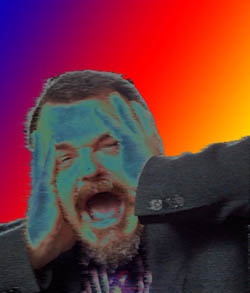 "We've been trying to figure that out for almost eighteen months now," said Jim James, Professor of Political Science and Voter Apathy at Yalvard University. “This race defies all of our models. Just for kicks, we went back to 2009 and used our model at the time to predict this election. Accounting for all the different variables – demographics, the poll numbers of the current candidates, their relative experience and personality factors – the model predicted that Bernie Sanders would challenge Hillary to a ‘battle to the death’ using ‘swords of some kind,’ and that Trump would ‘get bored, purchase an island somewhere in the South Pacific... and declare himself Lord and King.’ It never predicted we’d actually have to vote for one of these bozos.”

“I’ve come to believe you are all just figments of my imagination, all of you, this entire world, and I am the only human being in existence,” said Dr. Fred Fredrickson, Professor of Sociology and Mass Hysteria at Cornell University.

“People are just fucking nuts,” added Joyce Jocyln, Director of Cognitive Science and Psychopathic Mass Behavior at Princeton. “Years of unbridled, non-stop mass advertising and reality shows have worn their critical thinking mass down to a mere stub, removing any filter off their innate childish self-centered desires and thoughts. They’ll do and say anything, no matter how outrageous anymore in public, and nobody is in any better position to hold them accountable and call them out. It’s become an ID all-you-can-eat buffet, a hedonistic free-for-all, in the truest Freudian sense. Like I said, fucking nuts.”

Wall Street, even more panicked than the average American voter, sold everything in sight Friday burning 400 points off the DJIA as the inevitability of the upcoming election suddenly became crystal clear via a growing mass of dread and despair in the pit of its stomach. The Street then packed it in for a long weekend of single-malt scotch, fly fishing in Montana, and visions of several aborted suicide attempts on or around November 8th.