Bring Back the Butts 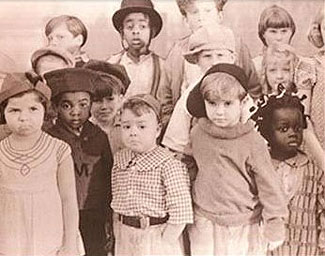 American television stinks. They give out awards (Emmys) for producing crap. The best thing that ever happened was the writer's strike, which partially shut down the foul industry. If only we could shut it all down.

Shows with lawyers and doctors and women who try to act and talk tough. Shows that because they lack imagination try to shock you with tepid hinted at sexual innuendo.

Let's go all the way. I've got an idea for a TV show so vulgar, so vile, so tasteless, it will be a smash hit. Once again. Bring back the Little Rascals. In prime time.

In case you haven't heard of them, the Little Rascals were a bunch of child actors in comedies in the 1930s. The show, under the guise of cute comedy, featured every type of disgusting perversion. It was X rated and at the time, nobody knew it. It was just as bad as anything you see on TV today. But it had going for it both pedophilia and butt fetishism.

Alfalfa is always hitting on Darla (Hood). The beautiful little brunette coquette. It's an on-again off-again case of the hots. At various times, Darla is interested in studious educated Waldo, but also the neighborhood bully Butch.

She can't make up her mind whether she's into muscle (Alfalfa) or poetry (Waldo). She's into all of it. She's a nymphomaniac. She's having it with all of them.

This goes beyond a ménage a trois. This is a five-a-trios.

Butch is always trying to beat up Alfalfa. He's the neighborhood sadist. But Alfalfa always wins thanks to the help of Porky and Buckwheat. During a wrestling match between Alfalfa and Butch, they strip Butch's trunks off.

And Spanky. What about him. Why is he named Spanky? What's up with that? A little SM action? A little bondage?

Spanky is dressed as a Roman soldier reciting Shakespeare on stage while naughty kids in the front row pelt his butt with pea shooters. The grand finale has the stage curtain rise and accidentally strip his mother's dress off. This is a perverted show.

Come to think of it. Buckwheat and Porky. You ever notice how they spend all their time together? What's with that? A little homosexual interracial action going on there? Huh? Buckwheat, an African American kid, used to be a protégée of the older Farina (another black kid). Evidently, he threw him over for Porky, a white kid, with his cute dimple.

And what about Porky? Why is he named Porky? A little pig action maybe. I mean, what will other kids do to a kid named Porky?

It's no secret that one of the child actors was named Little Dickie Moore.

His real name was actually John. Why call him Little Dickie? I'll let you draw your own conclusions.

These people are sick. SICK!

Back to Spanky. He puts firecrackers down Alfalfa's back pocket and sets them off while Alfalfa isn't looking. Alfalfa runs around with his butt on fire screaming. This is funny? You bet it is.

Hal Roach, the producer of these shorts, I think was a pedophile with a butt fetish. He also discovered and produced Laurel and Hardy. In one episode, the skinny guy (Laurel) lights the fat guy's (Hardy's) butt on fire, and then the fat guy runs around and screams and jumps down a well to put the fire out. Roach also got off on fat bodies. Obesity (Hardy) Funny! Funny!

Another time, Darla's father is dressed up in an ape suit and a tiny girl takes a bow and arrow and fires the arrow into his butt. He runs around in an ape suit with an arrow sticking out of his butt.

In yet another episode, the boys form a "Woman Haters Club," and paddle any member's butt with a big paddle who has any relations with a woman (girl). This is obviously a gay leather group into paddling. Kinky!

With a little updating, the show could be just as relevant today as it was back then.

I'd like to see George Bush as Alfalfa, and Dick Cheney as Porky.